A week or so following Gideon’s accident, Catherine Craigie dies. Gideon fulfils his promise to conduct her funeral in a non-religious manner. 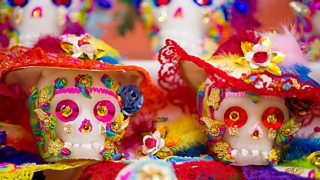 Gideon carries out her precise instructions. It is an unconventional funeral inspired by the Mexican Day of the Dead. There is music, dancing, sweets and kites.

The funeral is far-removed from a traditionally sombre and mournful Church of Scotland service. This attracts criticism and controversy from some of those in attendance. They are offended by the unchristian rituals involved.

Gideon is determined to tell people about his meeting the Devil, despite Lorna Sprott warning him not to. He reveals his story to a crowd of people at the end of the spectacular and powerful and strange service.

He tells the crowd about the mystical and sudden appearance of the standing stone and how he was rescued and nursed back to health by the Devil after his accident at the Black Jaws.

Gideon confesses that he had never believed in God until his experience at the Black Jaws and that he is no longer able to continue as their Minister. He also confesses to having an affair with Elsie Moffat.

Immediately after his confession, Gideon feels relieved and free of a huge burden. However, the crowd do not believe him. Some think he is drunk or ill. Some laugh at him and mock him. Others become angry and shout abuse. Gideon desperately tries to convince the crowd that he is telling the truth, but they remain hostile and sceptical.

In the aftermath of the funeral, Gideon is reported to the Church authorities for his improper conduct. He is suspended pending a formal investigation and probable trial.

His reputation in Monimaskit is completely destroyed. He becomes a figure of pity and mockery in the community due to his perceived mental illness.

Gideon becomes a recluse. He spends most of his time at home writing his manuscript, and rarely ventures outdoors. He begins to lose weight and his appearance deteriorates.

Gideon lives this solitary and isolated existence until he leaves Monimaskit in January 2004 in order to go and meet the Devil on Ben Alder.