The accident at the Black Jaws 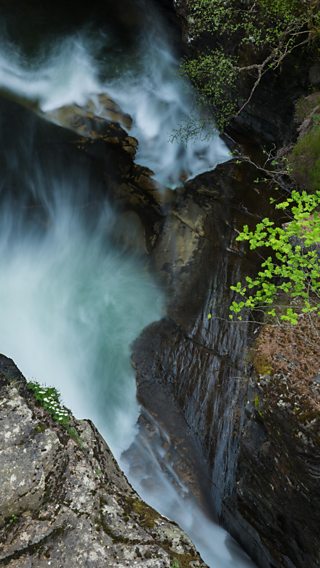 In September 2003, Gideon goes walking with Lorna Sprott in Keldo Woods. He decides to prove to her that the standing stone exists and reassure himself that he isn’t mentally ill or hallucinating.

While trying to rescue Lorna’s dog, Gideon falls from the edge of a cliff and crashes into the black and white frenzy of the Black Jaws gorge below.

As Gideon plummets through the river, he regains full consciousness, he has a vision of the stone and realises that he must live so that he can solve the unfinished business of the mystery behind its magical appearance.

Just as Gideon is about to drown, a hand reaches down and hauls him out of the water. He wakes up in hospital days later and is unable to remember how he survived. Gradually he begins to regain memories of what took place during the three days he was missing.

He tells the story of what took place to the artist Bill Winnyford and asks him to record his testimony. Over the course of a few hours, Gideon reveals what happened:

during the time I spent in the netherworld"

The Devil and the cave

Gideon reveals that he was rescued from the river by the Devil, who nursed him back to health in a huge cave and then allowed him to return home.

Gideon describes the strange cave that was his home for three days and we learn more about the mysterious figure who saved him, fed him, kept him warm and mended his broken leg.

Initially, Gideon has mixed feelings about being in the presence of the Devil:

During their three days together, Gideon develops a close friendship with this person and he comes to completely trust him. They agree to meet again on Ben Alder before going on an adventure together:

Let’s have an adventure, Gideon. Let’s escape from the world, you and I, let’s go on the run."