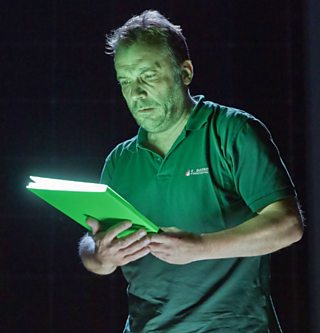 Credit: Brinkoff/Mögenberg
Ed's relationship with Christopher is loving, but tense (from a recent UK tour of Gielgud theatre production)

Ed is Christopher's father. Ed and Christopher have a loving but at times tense relationship. Ed has some very good traits, he is very patient and caring with Christopher and, like his son, he shows stubborn determination when the school initially won't allow Christopher to take his Maths A-level. However, on occasions Ed loses his temper with Christopher - in one scene he and Christopher actually have a fight. As Christopher investigates the murder of Wellington the dog, he and the audience discover two disturbing truths about Ed - that he lied to Christopher about his mother's death and that he killed Wellington.

These revelations cause a complete breakdown in Ed and Christopher's relationship - it is not until the end of the play that Christopher begins to trust him again.

Ed sometimes gets frustrated with Christopher and loses his temper. At one stage this results in an actual fight. However, Stephens wants us to see that this is not because of Christopher's unique behaviours. Living with people and parenting in general can be very challenging. In fact, Ed doesn’t see Christopher's conduct as strange - as Judy says, he just 'gets on with it' and tries to help him get through day to day challenges like any good parent would.

Sean Gleeson who played Ed explains the tense and strained relationship between Christopher and Ed.

Read this extract from the play then answer the question that follows.

I'll do you a deal. Five minutes OK? That's all.

He sets the timer for five minutes. It starts ticking.

Christopher, look .... Things can’t go on like this. I don’t know about you, but this…this just hurts too much. You being in the house but refusing to talk to me. You have to learn to trust me...And I don’t care how long it takes…if it’s a minute one day and two minutes the next and three minutes the next and it takes years I don't care. Because this is important. This is more important than anything else.

What does this extract tell us about Ed and his relationship with Christopher?

How to analyse the quotation

How to use this in an essay

This extract reveals a lot about Ed and his relationship with Christopher. When Ed says 'I'll do you a deal. Five minutes OK? That’s all.' He shows that he knows and understands Christopher incredibly well. Christopher likes to be given time frames and his father does this here to try to regain his trust. Ed also reveals how deeply he cares about Christopher when he says 'I don’t know about you, but this....this just hurts too much', the pause in the line and the repetition of 'this' indicates that Ed is at the point of breaking down emotionally because he is so upset about the situation between himself and Christopher. This is made more devastating when Ed states 'I don’t know about you', Christopher does not deal with emotion in the same way as other people, and so Ed genuinely is unsure about how his son feels at this stage. This makes the audience feel sympathy for Ed. Finally, Ed asserts that 'This is more important than anything else' referring to his relationship with Christopher. Ed puts his relationship with Christopher before even his own happiness, you could argue that Judy, his mother, does not always do the same.