One limit on presidential power is impeachment. This is effectively a means by which Congress can put a president on trial for abuse of power and, ultimately, remove them from power. 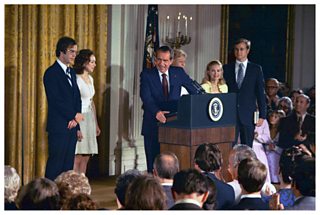 President Richard Nixon announces his resignation as President of the USA, 1974

Impeachment involves several steps. The initial stage, the power to investigate alleged wrong-doing on the part of the president, belongs to the lower house of the US Congress – the House of Representatives.

By a simple majority, the House of Representatives can vote to proceed with the impeachment process.

The next stage passes on to the Senate where the president is placed on trial. The members of the Senate vote on whether to convict the president. Unlike in the House of Representatives, a ‘super-majority’ of two-thirds of the vote is required to convict.

The impeachment of President Trump, 2019 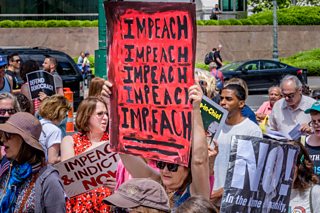 Protesters in New York call for the impeachment of Donald Trump, 2019

The Democrats allege that during a phone conversation in July 2019, President Trump illegally urged President Zelensky of Ukraine to investigate Joe Biden, a potential Democrat rival for the up-coming 2020 US presidential elections. Trump is accused of threatening to withholding military aid to Ukraine if Zelensky did not announce the investigation.

If true, the charges would be an abuse of presidential power – of using the presidency for personal gain to the detriment of national security. Trump denies any wrong-doing but could risk impeachment and being removed from office.

On 19 December 2019, the House of Representatives voted to impeach the president. They voted on two charges: 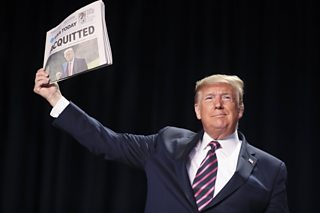 On 5 February 2020, President Trump was acquitted of both charges by the Republican-controlled Senate.

On the first charge – abuse of power – the vote was 52-48 in Trump’s favour. The only Republican senator to vote against Trump was Mitt Romney.

On the second charge – obstruction of Congress – the vote was 53–47 in favour of Trump. All 53 Republican senators backed Trump.

Trump joins just three other presidents to have faced impeachment: Bill Clinton in 1999; Richard Nixon in 1974; and Andrew Johnson in 1868.

None of the impeachment proceedings were successful. Clinton and Johnson avoided a super-majority verdict against them and Nixon resigned before he could be impeached.