The powers of the president 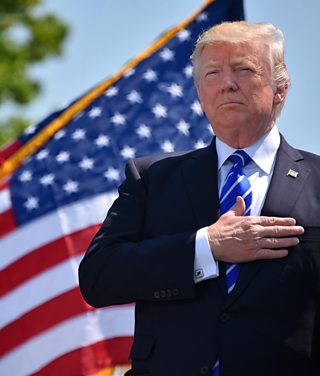 Donald J Trump is the 45th President of the United States of America (POTUS). The US presidential election is held every four years. An American citizen can serve a maximum of two terms as POTUS.

Commander-in-Chief of the armed forces

The POTUS has the responsibility of defending the USA including ordering troops overseas. However, only Congress can declare war, e.g. the Iraq War. Treaties must also be approved by the Senate.

The President appoints thousands of people to help run the country, including members of the US Cabinet, e.g. Secretary of State Rex Tillerson. However, nominations for overseas ambassadors must have the approval of the Senate. Article Two of the constitution requires the POTUS to nominate Supreme Court justices and with Senate confirmation, requires justices to be appointed.

The death of Supreme Court Justice Scalia in February 2016 led to debate as to whether President Obama should nominate a new justice so late in his presidency. Those in favour of an Obama nomination being appointed argued that the POTUS is elected and therefore has the power to do so, regardless of the point of his term in office. In February 2017, President Trump nominated Neil Gorsuch to replace Justice Scalia, restoring the Supreme Court's conservative majority. 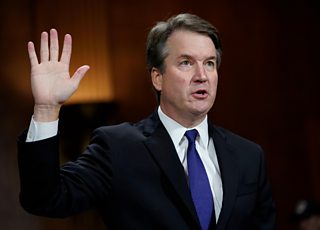 In 2018, Trump's nominee to replace the retiring Justice Anthony Kennedy on the Supreme Court sparked controversy. Brett Kavanaugh, a U.S. Court of Appeals judge, was accused by Dr Christine Blasey Ford, a research psychologist, of perpetrating a sexual assault on her at a party 36 years previously.

Kavanaugh refuted the allegations but widespread popular protests at suitability of his nomination ensued. Despite this, President Trump defended Kavanaugh's nomination and dismissed Blasey Ford's allegations as being fictitious and politically motivated.

Every January, the POTUS delivers his State of the Union Address to Congress. The president reviews the previous year and outlines spending plans and any proposals for legislation. The president cannot introduce legislation, only members of Congress can do this. Congress also controls the budget.

Before legislation becomes law, bills must be signed by the POTUS. If the POTUS disagrees with a new law he can refuse to sign, e.g. President Obama vetoed H.R. 3762 'Restoring Americans' Healthcare Freedom Reconciliation Act of 2015'. This would have repealed parts of the Affordable Care Act – also referred to as Obamacare.

Congress has the power to override the presidential veto if a bill is passed by two-thirds of the representatives of both Houses. For example, the House of Representatives voted by 241-186 in favour of overriding President Obama's veto of defunding Planned Parenthood. Overturning a veto requires a bill to pass by two thirds. On this occasion, the House failed to override the veto.

A 'pocket veto' or indirect veto is where a bill remains unsigned by the president and there is insufficient time, i.e. less than 10 days before Congress adjourns, for Congress to reject the presidential veto. This occurred when President Obama returned a bill unsigned to increase defence spending in 2009.

The president can bypass Congress on certain occasions by issuing Executive Orders (EOs). EOs allow the president to makes laws without Congressional approval. Under President Obama, over 154 EOs were issued, including a review of the detainees and the ending of unlawful interrogation techniques at the Guantanamo Bay detention camp used to hold people suspected of terrorism. While EOs can be powerful, the next POTUS can undo them quickly with new EOs.

President Trump issued a number of EOs during his first few weeks in office, including the controversial travel ban which halted all refugee admissions to the USA and temporarily barred people from seven Muslim-majority countries. US courts halted its implementation, following mass protests and confusion at airports. Other EOs issued promptly by Trump include the construction of two controversial oil pipelines (the Keystone XL and Dakota Access).

Congress can impeach or remove a president if they suspect any wrongdoing, although the use of this power is very rare.

As the only person elected by all Americans, presidents have enormous power. In particular, popular presidents with a like-minded Congress have used their support to increase their power.