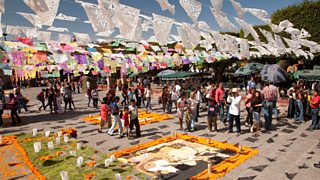 Here is some useful vocabulary:

Read the following statements about different festivals in Spain and Spanish-speaking countries - some are more well-known than others.

El Día de los Muertos is considered to be one of the most recognisable traditions of Mexican culture. The celebration takes place over two days: 1st November is dedicated to the souls of children and 2nd November to those of adults. There are traditional dances, authentic foods and Mexican entertainment.

El Carnaval de Tenerife is considered to be the second most beautiful in the world after Rio de Janeiro. You can find costumes, parades and music with Latin rhythms. This festival is celebrated three weeks after Easter and every year, a different theme is chosen and there is a competition to crown the carnival queen.

Seville is a very special city, especially during Feria de Abril. Seville is dressed in colour during the festival in order to represent the essence of this city and the cheerful spirit of its people. After a week of constant parties, the festival concludes with a big firework display next to the Guadalquivir river.

The donkey has its own festival day, El festival del burro, in the region of San Antero during Holy Week celebrations. During the parade, it's quite a spectacle to see the donkeys dressed up, often as famous people, competing to be the king and queen of the year.