Most materials need specialist tools and equipment to shape and form them - polymers are no exception because of the unique properties they generally possess.

When marking out on the surface of a polymer, especially on a sheet of acrylic, a ‘chinagraph pencil’ is used as this will mark on the high-gloss surface. If no such pencil is available, an alcohol-based permanent marker would also work to mark a line to cut to. Polymers that are cut by hand are usually done by a coping saw, or sometimes a hacksaw - if it is a smaller piece of polymer then a junior hacksaw can be used. Once the polymer is cut close to a marked line, a file can be used to remove up to the desired line. Files can be bought in different shapes, sizes and cutting grades - a rough-cut file can remove polymers faster than a smooth file and should always be used first. 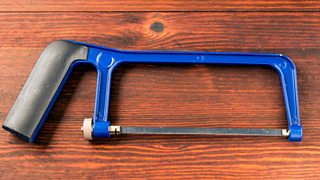 It is very often the case that the polymer, for example acrylic, needs to be bent to a shape. Once the acrylic is cut, either by hand or using a laser cutter, it can be bent using a strip heat, often called a line bender.

Acrylic needs to be heated to around 150 to 170 °C to bend without cracking, and jigs can be made in a variety of ways so that the bend produced remains the same as the acrylic cools.

Vacuum formers can be used for making moulds and housings for electronic products. High impact polystyrene (HIPS) is often the material used in a vacuum former, as it heats up quickly depending on thickness. The process is as follows:

Sometimes talc can be dusted on the former so that it drops out of the mould with ease. A good vacuum-formed mould will only be possible if a good former has first been made. The former must have a draft angle, so it doesn’t get stuck in the mould.

Polymers can also be shaped, once hot, by press moulding and drape forming - methods often used to shape acrylic. Once the acrylic is hot and malleable, it can be pressed over a former to take a new shape.