Like I Gave You Immortality and Shores, Girl of the Red-Gold Hair is taken from MacLean’s Dain Do Eimhir agus Dain Eile/ Poems to Eimhir and Other Poems, which was first published in 1943.

This collection, comprising of sixty poems, was not just central to MacLean’s career itself but a milestone publication in the history of Gaelic literature.

In this collection, MacLean’s writing continues certain trends and traditions of Gaelic writing, while also embracing contemporary themes and issues. In the collection, concerns include: 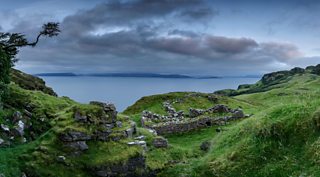 The breadth of thematic concerns included in Poems to Eimhir, suggests that the collection is not just addressed to one woman (or subject), as its title may suggest.

It is generally believed that Eimhir is not one woman but, in the purpose of this collection, used as a springboard to develop relevant themes. It does seem, however, that MacLean predominantly writes about two women in the collection:

Girl of the Red-Gold Hair documents MacLean travelling, at night, on a boat near the isle of Rasaay. The journey does not appear to have a destination, perhaps suggesting an element of futility and a sense of despair that MacLean is feeling throughout.