As the poem reaches its conclusion, Morgan’s language returns to this vivid description of movement. We hear that the bus brakes violently which indicates the sudden end to the stranger’s speech. 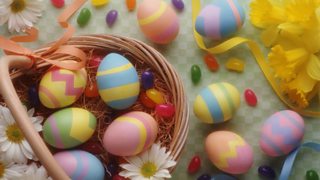 A basket of painted Easter eggs

The movement seems to propel the stranger from the scene as he lunges and swings from the bus. As we saw at the opening, the man moves in an unpredictable, unsteady manner.

By this point, we can see a link between the man’s disjointed speech and his actions. Morgan’s word choice gives us a clear impression of this character.

We hear that the man must buy Easter eggs for the kiddies and, at the end of the poem, Morgan reminds us of the errand. Thinking about this symbolically, it shows the contrasting attitudes towards religion in society.

In ancient times, eggs represented fertility and later, for Christians, represent the suffering and resurrection of Christ. For the stranger, the eggs are important yet their symbolic importance remains uncertain. They are important to him because he is supposed to get them for his children.

The structure of the poem’s final lines shows us, on the page, how shaky the stranger’s progress is. Morgan writes that he moves on very/nearly/steady/legs. The short lines mimic the jerky way the man moves and makes an indelible impression with the reader. This layout changes the pace of the poem and, fittingly, brings it to a wavering conclusion.