The first three lines describe the movements of the bus and report the first words of the stranger. The man’s errand, his search for Easter eggs, is revealed. This detail, linked with the title, hint that religion will be a key theme in the poem. 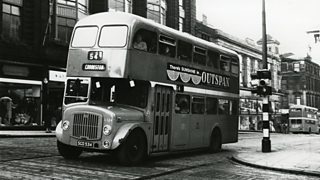 A double-decker Glasgow bus in 1961

This aside, the opening lines establish the setting and the situation of the poem - the speaker, travelling on a bus, encounters a stranger.

The man continues to chatter away, telling the speaker that he has had a drink and quickly moving on, offering a reason for his early drinking (he is celebrating a day off). He is quick to explain that he does not want to suggest that it is "right" for him to be drinking during a religious holiday.

For Catholics, Good Friday is a day of fast and abstinence, when drinking and eating meat is forbidden. Thus his guilty admission suggests he is aware of this and is therefore probably a lapsed Catholic.

Morgan’s word choice and structure help to convey the abrupt, unsteady movements of the bus and the man who sits beside the speaker. In the opening, the bus lurches, suggesting a sudden movement. This jolt establishes a visual picture of the way the bus moves and serves to root us in the scene. Mid-sentence, the stranger flops beside the speaker. This verb conveys the man’s uncoordinated effort to take a seat.

It might also convey the man’s exhaustion or, as is hinted at later, the effects of alcohol. The words flops and lurches can both be linked to the random nature of the encounter.

The structure of the stranger’s speech mirrors his unsteady movements. His words are punctuated with dashes as his speech falters and he offers asides. We get an impression of the stranger rambling, moving from topic to topic as his mind jumps to each new idea. Though questions are asked and dashes are used to indicate pauses, we do not hear the speaker’s responses.

This decision could suggest that either the speaker is a mute audience for the man rather than a participant in the conversation, or else he has deliberately excluded his own responses to focus our attention much more fully on the comments of the man.

The stranger’s language is peppered with Glaswegian dialect and informal language. The language establishes a conversational style and is important for bringing the scene to life - the man’s character is rooted in his movements, his manner and his words. Words like wasny and ye, as well as phrases such as I’m no saying and I’ve had a wee drink create a much more vivid and memorable voice, and protect the integrity of the encounter by allowing the man’s real voice to be heard.

When discussing the fact that he is drinking during a religious holiday, the stranger seems keen to explain himself, I don’t say it’s right/I’m no saying it’s right - ye understand – ye understand.

The repetition emphasises how self-conscious the man is and demonstrates a desire to show that he has a little understanding of the religious importance of the holiday. What is clear is that the man, a little worse for wear, is at pains to explain himself. The speaker, however, gives no indication that he judges the stranger.