Nick and Gatsby visit Tom and Daisy at their home. The four of them, plus Jordan, go into New York. Gatsby drives Daisy in Tom’s car, a blue coupé. Tom drives Nick and Jordan in Gatsby’s big yellow car; he tells them he has been investigating Gatsby’s background and suggests that Gatsby didn’t study at Oxford. 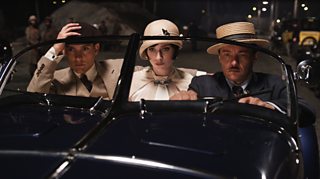 On the way to New York, Tom stops at the garage owned by George Wilson (Myrtle's husband) to get petrol. He tells Tom that they will be moving West soon, implying that he is aware she’s being unfaithful but doesn't know that Tom is her lover. Tom feels he is losing both his wife and his mistress.

In New York, Nick, Gatsby, Tom and Daisy take a room in a hotel. Tom questions Gatsby about whether he went to Oxford. He tells him he went for five months after the war as part of a scheme for American officers.

Gatsby tells Tom that Daisy is in love with him and she only married Tom because he was wealthy. Daisy cannot say she has never loved Tom. Gatsby says she is leaving Tom for him.

Tom then makes more specific allegations about Gatsby – that he sold alcohol in drug stores in New York and Chicago with Meyer Wolfshiem (remember the novel is set during Prohibition), as well as being involved in gambling. It is at this point that Gatsby 'loses' Daisy.

The group leave – Gatsby in his yellow car with Daisy and Tom taking Jordan and Nick in his own blue coupé.

We then hear about the accident that occurred just after this point. The narrative briefly switches to a court of inquest.

At the garage in the valley of ashes, George and Myrtle Wilson argue and she runs out into the street where she is hit by a 'big yellow car'.

The narrative switches back to Nick. Tom realises that it was Gatsby’s car that struck and killed Myrtle.

Back at Daisy and Tom’s home, Gatsby tells Nick that Daisy was driving the car that killed Myrtle but he will take the blame.