Changing role of women in wartime 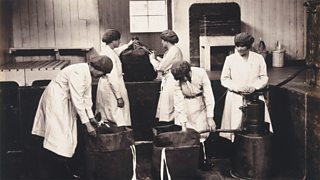 During the war the biggest increase in female employment was in factories, particularly in the munitions industry. Before the war, fewer than 4000 women worked in heavy industry in Scotland.

By 1917 over 30,000 women were employed making munitions in Scotland. Nationally, by late 1918, 90 per cent of the workers in the munitions industry were women.

Women also worked as conductors on trams and buses, and as typists and secretaries in offices and factories. Thousands worked on farms in the ‘land army’. Others filled more traditional jobs such as nurses, becoming important role models for women eager to feel they were ‘doing their bit’ for the war effort.

At first, men working in factories were worried about their loss of status and the threat to their wages - the problem was called ‘dilution’. Eventually an agreement was reached - women could only be trained to a semi-skilled level and had to work under supervision.

This meant that the men would not feel that their status as skilled workers was undermined.

The Great War is often seen as a major turning point in the role of women in British society. However, when the war ended the majority of women did not keep their wartime jobs.

The Restoration of Pre-War Practices Act meant that returning soldiers were given their old jobs back and the closure of most munitions factories meant women workers were no longer needed. Within a few years of the end of the war, over 25 per cent of all working women were back in domestic service – childminding and housework.