The real threat to Britain's food supplies and its ability to continue the war effort came in 1916 when a new campaign of 'unrestricted submarine warfare' began with deadly effect.

By August 1917, 1,500,000 tons of British merchant shipping had been sunk. At one stage only four days supply of sugar remained and a few weeks worth of wheat flour. The shortage of many forms of food led to long queues at the shops and rapidly rising prices.

In Britain various measures were taken to prevent starvation. In December 1917 compulsory rationing was finally introduced after voluntary schemes had failed. The aim of rationing was to conserve food supplies, ensure fair distribution and control rising prices caused by food becoming more scarce.

For wealthy people these price rises were an inconvenience but for the poor they meant less money to spend on other essentials. An organised system of rationing could help control the prices of basic foods as well as ensure a sufficient and regular supply. 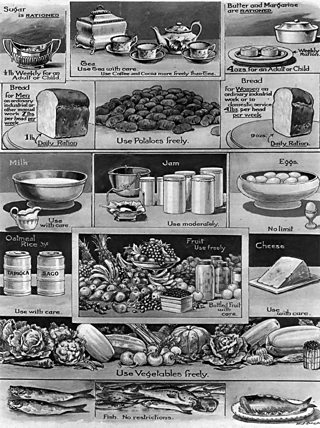 Rationing was gradually introduced and was in force throughout Scotland by April 1918. Sugar was the first to be rationed and this was later followed by butcher meat. By the end of the war almost all foods were subject to price control by the government.

Rationing did ensure fairer supplies of food at reasonable prices, but the defeat of the U-boats and the surrender of Germany in November 1918, meant that Britain did not have to test the rationing system to its limits.

The Royal Navy's blockade had led to a lack of food and war material in Germany, so arguably victory had gone to the country that could manage its shortages most effectively.

Town councils were encouraged to allocate patches of land to townspeople to grow vegetables. The government also began a propaganda campaign to reduce waste and produce more food.

British farmers were paid subsidies to plough up pasture land and plant crops such as potatoes and wheat which were rich in carbohydrates.

As a result of these measures, although there was a degree of scarcity, Britain was never faced with food shortages on the same scale as Germany. In the winter of of 1917-1918 over 500,000 German civilians died of starvation.

When war broke out, Scotland's East coast fishing industry faced hard times. Initially the North Sea was almost totally closed to fishing, although when food supplies became scarce restrictions were lifted. However, by this point many boats and crews were serving as support to the Royal Navy.

In 1918, the fishing industry faced rising fuel costs and needed to repair and re-equip boats after war service. Although the fishing industry did recover, traditional export markets in Germany, Eastern Europe and Russia were lost due to revolution and post-war changes.