Traffic has a huge effect on the quality of our environment. Here are some useful words for talking about traffic and congestion: 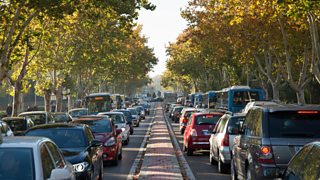 G is incorrect because there is no mention of trains (en tren de means 'in the process of').