The 'Triangular Trade' was the sailing route taken by British slave traders. It was a journey of three stages. 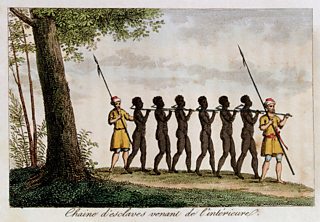 Enslaved people were chained together to be moved

At first some people were captured and enslaved directly by the British traders. They ambushed and captured local people in Africa.

The slave ship then sailed across the Atlantic to the West Indies – this leg of the voyage was called the 'Middle Passage'.

On arrival in the West Indies, enslaved people were sold at auction.

In 1700, the selling price of an enslaved person in the West Indies was £20. This meant there was a good profit to be made, which made the risks worthwhile.

Some ships then loaded up with sugar and rum to sell in Britain, before making the voyage back home.

The video below explores the triangular slave trade.