The mother and daughter relationship in A Taste of Honey (play) 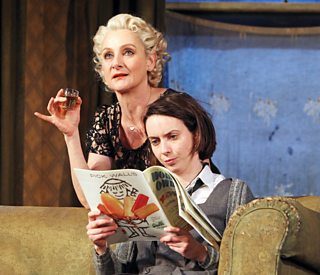 During the course of the play it is obvious that the relationship between Jo and her mother Helen is a troubled one. From the moment they enter the flat in Act One Scene One, they quarrel and bicker. Jo is unhappy with Helen’s choice of accommodation whilst Helen tells her that it is all she can afford, When I find somewhere for us to live I have to consider something far more important than your feelings . . . the rent. It’s all I can afford.

Jo is angry because she believes Helen very rarely considers her feelings - this is something that torments Jo during the play. She is torn between being a child who needs her mother to look after her and being a grown-up who realises that her mother will probably never put her daughter’s needs first.

There are times when Jo tries to show her mother that she does not need her, such as when she talks of leaving school in order to get a job of her own and gain some independence. However, there are other times when she seems especially vulnerable, such as when she admits to still being afraid of the dark. Jo tells Helen, I’m not frightened of the darkness outside. It’s the darkness inside houses I don’t like.

Jo has been left on her own many times at night whilst Helen goes out with friends and boyfriends. However, she has never got used to the dark and is often afraid of being left on her own at night time.

Even though Jo and Helen spend much of their time arguing and their relationship is a less than harmonious one, Jo still yearns for attention from her mother and appears to be quite jealous of the attention Helen pays to her boyfriend Peter. Jo is rude to Peter from the moment she meets him and does all she can to discourage their relationship, stating, I suppose she hasn’t told you about me.

Jo is even more alarmed when she discovers that her mother is actually contemplating marrying Peter and once again tries to convince Helen that she is making a mistake, You’re centuries older than him.

At the same time she does not hesitate to use the opportunity to insult her mother and this characterises the nature of Helen and Jo’s relationship. Helen too is not afraid to taunt Jo, telling her that the day she gave birth to her daughter is one she has always done my best to forget.

However, near the end of the play, a change can be seen in the relationship between mother and daughter. Jo seems to want her mother near her when she is about to give birth, asking her Are you coming back? Similarly, Helen seems far more sensitive to Jo’s needs when Jo begins to go into labour.

Previously Geof has asked Helen not to frighten Jo with stories of how painful labour and giving birth can be and Helen appears to be reminded of this when she tells Jo, It’s not so much pain as hard work, love. However, when she discovers the father of the baby is black, Helen is shocked, declares she needs a drink and leaves Jo alone in the flat.

There is one difference in that this time she has agreed to come back, so it is possible that by the end of the play the relationship between Helen and Jo has changed for the better. After all, Helen revealed a certain tenderness when Jo began to go into labour and Helen stroked her hair.

How is the theme of the mother and daughter relationship between Jo and Helen shown in the play?

In A Taste of Honey, Shelagh Delaney shows the theme of the mother and daughter relationship between Helen and Jo through:

The way Helen and Jo argue and bicker

Throughout the play Helen and Jo argue constantly. The typical exchanges of affection and love that characterise most mother and daughter relationships seem to be mostly missing.

Jo
I don’t owe you a thing.
Helen
Except respect, and I don’t seem to get any of that.
Jo
Drink, drink, drink, that’s all you’re fit for. You make me sick.

This exchange between Jo and Helen is a typical example of the way they respond to one another. Jo is angry with Helen for being selfish and putting her own needs first, such as her love of socialising and drinking. Helen, on the other hand, is suggesting that as Jo’s mother she deserves more respect and she is angry that Jo does not give her this.

During the course of the play Helen appears to be a very selfish mother, even leaving Jo alone at Christmas in the squalid flat so that she can go away with Peter.

Jo
[To Geof.] … Every Christmas Helen used to go off with some boyfriend or other and leave me all on my own in some sordid digs

It is obvious that there have been many Christmases when Jo has been left alone, even when she was a young child. This implies that Helen has been a selfish mother for many years and has thought nothing of leaving Jo alone even at Christmas in order to enjoy the company of a variety of different men.

When Jo is heavily pregnant Helen returns to the flat and says she has come to look after Jo whilst she has the baby.

Helen
[To Jo.] It’s all right, love, I’m here and everything’s all right. Are you awake now?

Helen’s return and decision to care for Jo when the baby arrives suggests that she intends to behave more like a loving mother to Jo than she has previously. Here, use of the term love seems to express this in particular.

However, it should also be remembered that Helen’s return to the flat comes after she has been thrown out of the house she shared with Peter as he has begun an affair with another woman. An argument could be made for saying Helen has returned simply because she has nowhere else to go.

She also fails to take into account Jo’s feelings when she orders Geof to leave, thereby selfishly ending the only true friendship Jo has ever had.

How does Shelagh Delaney use the theme of the mother and daughter relationship between Helen and Jo in her play?

Shelagh Delaney uses the theme of the mother and daughter relationship between Helen and Jo: