What is development and how is it measured?

Development is any improvement in the standard of living of people in a specific country. It is measured using development indicators.

Social indicators show how a country uses its wealth to try and improve the quality of life of its people.

Social indicators can measure different things like health (doctors per 100,000), diet (calories per person per day) and education (adult literacy).

Development indicators are averages, therefore figures may disguise inequalities within a country.

For example, in Somalia the capital Mogadishu has a lower death rate than average as there is better access to hospitals and doctors there, compared to more rural areas in the country.

In the south of the country the death rate is higher than average as there is food insecurity, due to prolonged civil war and natural disasters.

The capital city of a developing country often has better development statistics than the rest of the country because the government is based there. Facilities are more likely to be provided in the capital before they can afford to be provided elsewhere.

In any developing country there are massive differences between urban and rural areas. Rural areas are far less likely to have access to clean water and sanitation, health and education facilities or to get help from international aid. 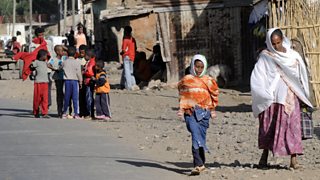 In Kuwait, huge oil revenues give a high GNP per capita. However, the money is spread unevenly and only goes to a few rich families, leaving the rest in poverty. Kuwait’s birth rate and adult literacy rate are not those expected of a rich country.

Gross Domestic Income (GDI) per capita is an average figure which can hide huge differences in wealth between cities and the countryside. This is especially true of countries such as Brazil.

Most developing countries’ censuses are poorly financed and information is often inaccurate. This means statistics cannot be fully trusted.

Many indicators from certain countries are inaccurate. Countries such as North Korea do not want information about true conditions in the country to be known.

Calories per day is an inaccurate measure as in some countries people consume only one type of food. This is not a balanced diet. This happens in Malawi which has mainly a maize based diet.

In countries such as Bangladesh Gross National Income (GNI) per capita is irrelevant as many of the people are involved in subsistence agriculture. They do not use money and mainly barter to obtain goods and services.

To make development indicators more reliable, experts use composite indicators, such as the Human Development Index (HDI). This is a combination of different indicators.