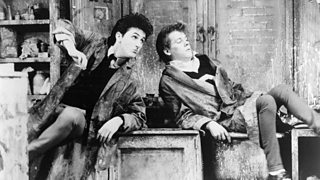 Sean Penn and Kevin Bacon as Phil and Spanky in the 1983 Broadway production of 'The Slab Boys' Credit: ZUMA Press Inc./Alamy

Ultimately, The Slab Boys is a comic play and humour is used in various forms with a spectrum of effects.

Black (or dark) comedy describes the use of humour to make light of a dark, or morbid subject matter. Byrne manages to find humour in many of the character’s tragic stories.

Sadie’s heart-breaking backstory is steeped in humour as she explains to Lucille that her husband mistook her prosthetic breast for one of our James's old footballs that got bursted.

Phil’s casual description of his mother’s behaviour; All she done was run up the street with her hair on fire and dive through the Co-operative window is at once comical and tragic.

Spanky’s quick wit lightens even the darkest of situations, justifying Phil’s violent behaviour by telling Alan You don’t want to pay too much attention to Phil, son…he reads a lot.

Phil evens manages to provide a laugh when discussing his dismissal from work, telling Spanky Yes, you might’ve been lucky and got the bag like me, old chap.

This ability to make light of the most harrowing events shows the character’s reliance on humour to get them through the day and leaves the audience laughing at a host of tragic situations.

Parody is humour through imitation, and Phil and Spanky regularly assume and exaggerate other characters for comic effect.

When Alan first arrives they introduce him to the slab room in the style of television presenters Right Eamonn… let’s show you some of the mysteries of the slab room. Mr Farrell… adding an energy to the scene and emphasising the mundane nature of the work.

Phil also adopts the persona of an upper class gent, parodying the heightened language and privileged lifestyle of those he resents:

A trick, you cad, take that

This creates comedy, but also reveals Phil’s defensive nature. He finds it easier to cope with his difficult situation by assuming the guise of another, removing himself from the reality of the situation, as if in denial.

At the end of the play, Phil’s use of euphemism and parody allows him to plan his next move, without facing up to the grim reality of his situation:

Confront the old duffer…break the news about the scribblin’ school, the sack, and…oh yes, the old dear’s impromptu dip.

Farce is a style of comedy that aims to entertain the audience through creating situations that are highly exaggerated and improbable, featuring a flurry of entrance and exits, mistaken identity, physical humour and absurdity.

The opening of Act Two delivers on all counts. Hector’s absurd appearance, Lucille’s assumption that Hector is a terrifying monster, and Phil’s increasingly aggressive approach to concealing him from the bustle of visitors to the slab room creates much hilarity. This culminates with the arrival of Hector’s restyled outfit - a ridiculous look which the Slab Boys, somehow, manage to convince him looks just incredible

The stage directions are key to the humour in this scene, as much of the comedy is physical. Hector is instructed to tumble out of the cupboard, before being bundled back in, and the timing of the entrances and exits is perfect.

The slab room is filled with word play and puns. This reveals the quick wit, and potential intelligence of the Slab Boys.

Upon being told that Phil’s mum is to be wired to a generator, Spanky comments, That’s shocking.

The word play also reveals the lack of respect for authority in the slab room, as the boys are not afraid of using their weapon of words against Mr. Curry. In response to Mr. Curry’s berating of the Slab Boy’s work ethic (That cabinet out there speaks for itself), Phil simply replies talking furniture, instantly dismissing the scalding and belittling Mr. Curry.