Rio de Janeiro is surrounded by mountains and this makes traffic management difficult. A large volume of traffic is forced along a few main roads causing severe congestion, noise and air pollution from vehicle exhausts. 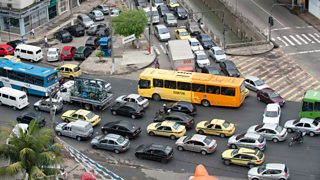 In the past, most of the journeys in Rio were made by bus or private car, with only a small percentage of journeys made via the metro system and rail network. This has changed in recent years as efforts have been made to improve transport in the city.

Rio de Janeiro is the most congested city in South America, but officials have worked hard to improve its transport system in time for hosting the 2014 FIFA World Cup and the 2016 Olympics. Brazil is investing in expanding train and subway lines and improving road infrastructure as it works to cut down on Rio's infamous congestion.

A recent study showed that an average drive through Rio will take fifty per cent longer at peak times, compared to off-peak times.

For example, commuters traveling to or from Barra da Tijuca during evening rush hour, suffer long delays daily. The number of cars in Rio de Janeiro has grown by over forty percent in the last decade and traffic congestion is an increasing problem.

The city declared three extra public holidays during the recent World Cup to alleviate traffic congestion. Rio and Sao Paulo witessed increased congestion every time a game was played but the situation was much better than expected. 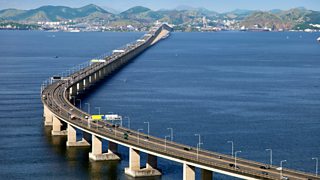 The Rio Niteroi bridge is 14 km long and was one of the longest in the world when it opened in 1974. It connects Rio with the city of Niteroi across Guanabarra Bay, providing a shorter alternative to a 80 km road journey or a one-hour ferry crossing. However, due to rising levels of car ownership, each end of the bridge is completely jammed at rush hour causing major congestion.

The 21 km ‘Yellow Line’ expressway was opened in 1997 and connects Barra da Tijuca in the West Zone with Rio’s North Zone and the international airport.

It is a toll road, as Rio’s authorities did not have enough money to cover the cost of building it. Seventy thousand vehicles use the road each day, thirteen thousand more than expected. So far the road has been successful in removing around forty per cent of traffic from local roads in the area.