Heat energy is a very difficult energy to store as it can transfer in three different ways from warm surroundings to cooler surroundings. The three processes are conduction, convection or radiation.

A conductor is a material that allows internal (thermal) energy to be transmitted through it easily.

Metals, such as copper and aluminium are the best conductors of heat. This is because metals have loosely held outer electrons surrounding the atoms called 'free' electrons. Metals are also good electrical conductors because these electrons carry an electrical charge.

This means that when the end of a metal rod is heated the atoms of the metal vibrate like in every other non-metallic material.

A metal bar is heated up

The heat energises the atoms and vibration increases

The vibration spreads throughout the metal heating up the entire bar

The process that makes metals better heat conductors is that these free electrons also vibrate, and they collide with more atoms in the metal transferring their energy to the next one and so on along the rod. This means more of the kinetic energy is conducted through the metal, meaning more heat is transferred along it.

The cushion of a chair is an insulator. A metal seat at a railway station will feel cold as it conducts energy away from the passenger's body, whereas a cushion on the chair would not allow energy to flow so easily.

An insulator is a material that will not allow the easy flow of energy through it.

Convection is the heat transfer due to the movement of a fluid, such as a gas or liquid, and carries heat energy away from the source of heat.

When a substance is heated, it causes its particles to vibrate more. The more vibration, the more space they will take up and the less dense they will become. The less dense fluid will always rise above the denser fluid and take the heat energy with it. Hot water rises above colder water inside a domestic central heating tank.

Convection currents can be seen in lava lamps. The wax inside the lamp warms up, becomes less dense than the liquid and rises. As it rises, it cools and becomes denser again, so it sinks and starts the process again. The same effect can be seen by putting a crystal of potassium permanganate at the bottom of a beaker of water and gently heating it.

Convection explains why hot air balloons rise, and also why it is often hotter in the lofts of houses than downstairs. As well as these examples, convection is seen on a much bigger scale in our weather and ocean currents.

Because no particles are involved, radiation can even work through the vacuum of space. This is why we can still feel the heat of the Sun even though it is 150 million km away from the Earth.

If two objects made from the same material have identical volumes, a thin, flat object will have more surface and will radiate heat energy faster than a fat object. This is one reason why domestic radiators are thin and flat.

Radiators are often painted with gloss paint, but they would be better heat radiators if they were painted with matt paint instead. A radiator actually transfers most of the heat to a room by convection, not radiation because it warms the air above it which then circulates.

Heat energy is lost from buildings through their roofs, windows, walls, floors and through gaps around windows and doors. However these losses can be reduced.

In this thermogram of a house, the roof and windows are the hottest, showing that most heat is lost from the house through those parts. 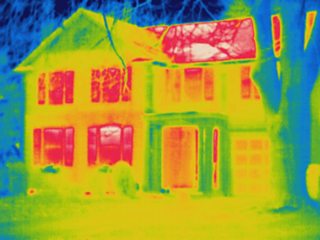 A thermogram of a house. This type of image is important in determining heat loss.

There are several different ways to reduce heat loss:

Simple ways to reduce heat loss include fitting carpets, curtains and draught excluders. It is even possible to attach reflective foil to the walls, especially behind radiators.

Heat loss through windows can be reduced by using double glazing. These windows have two panes of glass with air or a vacuum in the gap between the panes. If the double-glazed window has a vacuum between the panes, there will be no conduction or convection. If the double glazing is made with air in the gap then convection is reduced because there is little room for the air to move and set up a convection current in the gap. Air is a poor conductor so there will also be very little heat loss by conduction.