In 1861, Pasteur published his germ theory which proved that bacteria caused diseases. This idea was taken up by Robert Koch in Germany, who began to isolate the specific bacteria that caused particular diseases, such as TB and cholera. It was Koch who realised that antibodies could help destroy bacteria and build up immunity against disease. However, back in France it was Pasteur who developed the first vaccines since Jenner, with vaccines for chicken cholera, anthrax and rabies.

In his laboratory Koch also pioneered the use of stains to see bacteria more clearly under a microscope. His assistant, Julius Petri, invented the Petri dish to help in this process and the science of bacteriology developed rapidly. Koch’s research led to a study of disease prevention and the treatment of disease by vaccines and immune serums, a branch of medicine now called immunology.

A further breakthrough came in 1896, when Almroth Wright, a British bacteriologist at the Army Medical School, developed a vaccine for typhoid. At the time, typhoid would often kill more soldiers fighting in wars than were lost in combat. 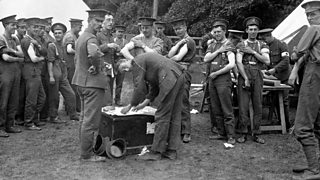 Soldiers getting their jabs before mobilisation to the Front during World War One, circa 1915

In Wales, the Medical Officer of Health for Ebbw Vale, Dr J W Power, suggested that courses in bacteriology should be organised for Ministries of Health, and in 1886 one was established at King’s College, London. In 1898, a public health laboratory was established in Cardiff to investigate the causes of outbreaks of disease. By the end of the 19th century, Wales had undergone a major transformation.

Some of the milestones in vaccination are set out in this timeline.

As time has progressed, vaccines have been developed for a wider range of diseases. However, even as late as 1870 in Blaenavon, a measles epidemic was claiming the lives of six or seven children per day. Fortunately, the development of vaccines mean that outbreaks like this one should no longer occur.

In fact, mass vaccination has been one of the main reasons for the rapid fall in infant mortality over the last 100 years.

In 2013 in the UK, the average two-year-old would have had a total of nine vaccinations giving immunity from 22 different diseases.

However, there have been other important developments in the last 150 years which have also helped to prevent disease in Britain.