Bruce still had the support of Bishop Wishart of Glasgow, who pardoned him for his supposed crime. Wishart convinced Bruce that the time was right to declare himself king. He helped organise Bruce's coronation.

Bruce was inaugurated king of Scotland on 25 March 1306 at Scone. The ceremony took place without the Stone of Scone and the Scottish Crown Jewels. These had been taken to England by Edward I in 1296.

Only a few supporters were present and the ceremony was led by the Countess of Buchan. This emphasised the lack of support Bruce had among Scottish nobles, many of whom were allied to the deceased John Comyn or John Balliol. The threat of civil war loomed once more.

Bruce had little support and many intended to crush his kingship. He suffered a number of setbacks in his first few months as king.

Bruce was defeated by an English force and suffered heavy losses. He retreated from this defeat towards his homelands in the south west.

Before he could reach his lands, Bruce’s remaining supporters were virtually wiped out by the Scottish noble, John MacDougall.

MacDougall was a supporter of Comyn and was looking to exact revenge for the murder at Greyfriars.

Bruce's brother, Neil was hung, drawn and beheaded. His wife, sisters and daughter were captured by English forces and placed under house arrest. They were kept as hostages - either for ransom, or to help negotiation if Bruce ever became powerful again.

Bruce’s sister Mary, and Isabella, the Countess of Buchan were both imprisoned. They were put in cages that hung from the walls of Berwick and Roxburgh Castles, respectively, as a warning to other rebels.

Bruce fled the Scottish mainland. At this point in his reign, Bruce had gained the nickname King Hob – he was 'King Nobody’.

It is not known exactly where he went, although he probably spent the winter on an island off the west coast of Scotland. Some historians suggest he stayed on Rathlin Island between Kintyre and County Antrim in Northern Ireland.

During this period of absence, two of his brothers were captured by the English and executed.

Bruce returned to the mainland in early 1307 and was more successful.

From February to April 1307, Bruce gathered support in his family lands at Carrick and managed to defeat a small English garrison at Glen Trool.

In May 1307, Bruce was then able to defeat a much larger English force, led by Amyer de Valance, at Loudoun Hill.

Bruce arrived in the area first and was able to prepare an ambush. He set traps and took up position on the higher ground. 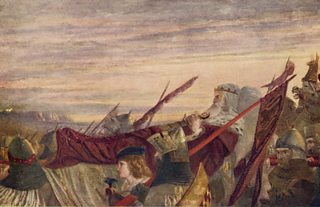 Edward I died near the Scottish border

Defeating what had been the main English force in Scotland gave Bruce and his supporters great confidence.

In July 1307 Edward I headed to Scotland to crush the new resistance. He fell ill near the Scottish border and eventually died at Burgh-on-Sands. His son, King Edward II of England decided to return south, rather than confront Bruce.

Edward II needed to secure his position among his own nobles before he could wage war in a foreign country. The resulting delay gave Bruce time to solidify his position as king of Scotland.