An estimated 67 large cities, each with a population greater than 100,000, are close to volcanic regions. The number of people at risk from earthquakes and tsunami is even larger. Ultimately, the greater the nearby population the greater the threat to human life. One region at greatest risk is the Pacific Ring of Fire. Over 450 of the world’s active volcanoes are located here, a region with over 1 billion people.

People in low income countries (LICs) are more vulnerable to the threat of tectonic hazards because of poor health services, lack of emergency services and poorly built houses and structures. In Shillong, a city in north-east India, over 90,000 of the 400,000 inhabitants are at risk from earthquakes because they live in cheaply constructed multi-storey buildings which cannot cope. Many are on steep-sided hillside locations which would easily collapse, crushing all inside. 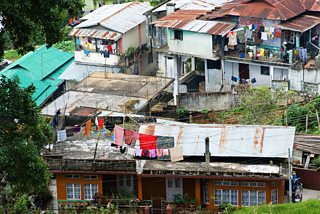 Poorly constructed houses in India are vulnerable to earthquakes

Poverty is a major issue throughout the world. People with low incomes, or people who rely on support from family members, would find it difficult to better protect themselves and to increase their capacity to cope with a natural disaster.

In some regions of the world, farming is challenging due to poor farming methods, difficult climate and thin soils. It is the people within marginal areas of land who often suffer most during an earthquake because they are unable to afford strong buildings to live in and they often have poor communication links.

It is very difficult for people and services to get into remote and underdeveloped areas affected by natural disasters, if the transport and communications systems are poor.

When natural disasters such as tsunami and earthquakes strike, there may be secondary problems associated with them, which impact on jobs and businesses, as factories and industries could be affected by the disaster. In addition, some of these industries may create wider environmental problems, such as spills and leaks, which can also affect the lives of local people. 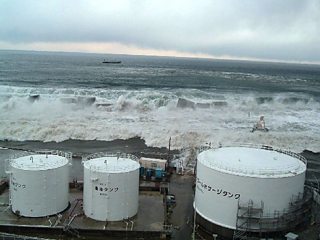 The Fukishima nuclear power station in Japan was badly affected and almost destroyed by the 2011 tsunami. This greatly affected the lives of many as radiation leaked into the surrounding areas.

There is a direct link between education and wealth. People with poor education or limited access to education are most vulnerable during a natural disaster because they may be unaware of how to deal with the crisis. In addition, they may live in poorer communities where housing and transport is poor.