In April we’ll be changing to bring you daily content that supports your education and wellbeing. Stay on track with Bitesize, we’ve got you!

There are three major factors which can increase the threat to people:

Vulnerability, in the context of hazards, means the ability of an individual or group of people to anticipate, cope with, resist and recover from the impact of a natural hazard, or man-made hazard.

To determine the magnitude of a volcanic event, scientists or volcanologists use a measure called the Volcanic Explosivity Index (VEI). This is a measure of the height and volume of the plume which is ejected from the volcano. Each point measured is ten times the magnitude of the one before it.

The moment magnitude scale (Mw) is used to measure earthquakes. It measures the distance moved by a fault multiplied by the force needed to move it. Each number on the scale is ten times more powerful than the preceding one.

The type of tectonic hazard is also an important physical factor which can increase the threat posed by an eruption. Often, when a volcano erupts, lava flows and ash clouds form. The deadliest types of volcanic hazards are pyroclastic flows and lahars.

At the Soufrière Hills on the island of Montserrat (between 1995-1997), a gigantic wall of super-heated pyroclastic flow sped down the side of the volcano at a speed of over 100 km/h, with temperatures exceeding 600°C. 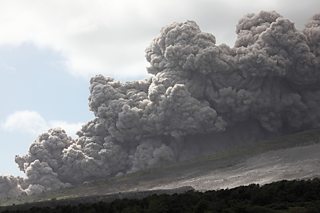 A large mass of material collapses and flows downhill, a pyroclastic flow

Lahars are another deadly after-effect of a volcanic eruption. The mud flow can sweep away roads, bridges and buildings. Farmland and crops are destroyed, putting a great strain on food supplies in the area.