The German people had suffered terribly during both the First World War and the Depression and a huge part of the Nazis’ appeal was that they promised to make Germany’s economy strong again. Hitler aimed for full employment and by 1939 there was virtually no official unemployment in Germany. He also wanted to make Germany self-sufficient (a concept known as autarky), but the attempt to do so was ultimately unsuccessful.

Although Germany claimed to have full employment by 1939, many groups of people were not included in the statistics, including:

The policy of Autarky was a failure. In 1937, Hermann Göring was made Economics Minister with the job of making Germany self-sufficient in four years. However, the measures he introduced, such as tighter controls on imports and subsidies for farmers to produce more food, were not successful. By the outbreak of World War Two Germany was still importing 20 per cent of its food and 33 per cent of its raw materials.

Changes in the standard of living

Despite the loss of freedom, some aspects life improved in Germany for many ordinary people if they were prepared to conform in order to have a job and a wage.

Big businesses - By 1937 monopolies (which the Nazis had promised to tackle) controlled over 70 per cent of production. Rearmament from 1935 onwards boosted profits and managers of the major industrial companies saw their wages rise by 50 per cent between 1933 and 1939.

Small business - Rules on opening and running small businesses were tightened, which resulted in 20 per cent of them closing.

Farmers - Having been one of the main sources of their electoral support during their rise to power, farmers benefitted under the Nazis. By 1937, agricultural prices had increased by 20 per cent and agricultural wages rose more quickly than those in industry. The Hereditary Farm Law of 1933 prevented farms from being repossessed from their owners, which gave farming families greater security. The downside, however, was that farmers could no longer sell their farms which kept them fixed on the land. 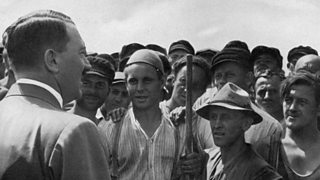 Before 1933 the Nazis had lacked support amongst the workers, who tended to vote for the communists or the Social Democratic Party. The needs of German rearmament made it important that workers were productive and controlled. so the Nazis set up three organisations that would manage German workers:

Those working in the rearmament industries aside, living standards did not really improve for German workers under the Nazis. From 1933 to 1939 wages fell, the number of hours worked rose by 15 per cent, serious accidents in factories increased and workers could be blacklisted by employers if they attempted to question their working conditions.