A well-documented example of brain damage is of Phineas Gage, who in 1848 had a serious accident whilst laying railway tracks and an iron rod went through his skull.

Phineas survived the accident and could still walk and talk, but it was documented that his personality changed following it. It was noted that he lost his inhibitions socially and emotionally.

Doctors realised the changes in Phineas were due to the damage in the particular parts of the brain that the iron rod had passed through. This important case allowed scientists to examine the effect of the injuries on his brain activity.

There are three modern techniques used to scan brains:

MRI scanners use strong magnetic fields and radio waves to show details of brain structure and function. Patients are asked to perform various tasks and, by looking at the scan, scientists can see which parts of the brain are active when the task is carried out. The patient lies on a bed which moves into the machine. Some people can feel claustrophobic inside an MRI scanner. 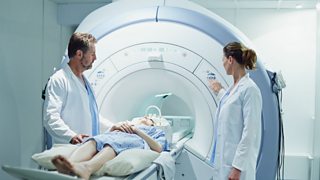 A patient beginning an MRI scan

CT scanners are similar to MRIs. The patient lies on a bed which passes through a ring of equipment (not into the machine like in MRI). The ring takes a series of x-rays from different angles. These are processed by a computer to allow the doctors to see inside brains and other parts of the body.

PET scanners detect gamma rays that radiate from a chemical compound called a tracer. PET scans are used to detect high levels of metabolic reactions inside a person. Before going into the scanner the patient consumes the tracer. This travels to any area of the body which has unusually high levels of metabolic reactions. This is often a tumour and so PET scans are used to detect cancers.