Goebbels and the Ministry of Propaganda

Hitler and the Nazi Party were a constant presence in the life of the German people, with: 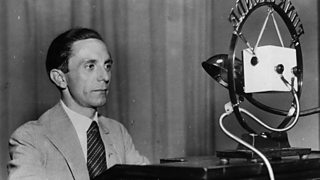 The government department responsible for all of this was the Ministry of Enlightenment and Propaganda, headed by Dr Joseph Goebbels.

It aimed to brainwash people into obeying the Nazis and idolising Hitler through a range of different methods.

Censorship of the press

All newspapers were controlled by the government and could only print stories favourable to the Nazi regime.

Radios, called the 'People's Receiver', were sold very cheaply so that most Germans could afford one. All radio output was controlled by Goebbels’ ministry through the Reich Broadcasting Corporation.

Radio sets with loudspeakers were also placed by the Nazis in places like cafes, factories, town squares and street corners, so everyone could hear the Nazi message.

These public displays of support for Nazism involved music, speeches and demonstrations of German strength. The biggest one was held each year in August at Nuremberg.

Use of sports events 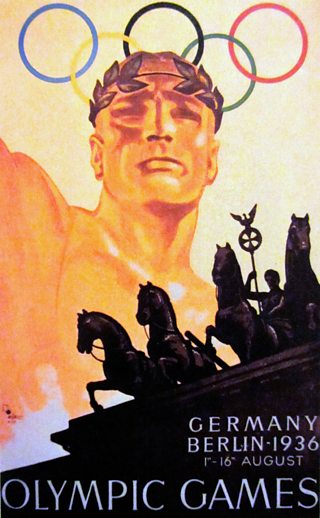 Berlin hosted the Olympics of 1936, which the Nazis used as an opportunity to showcase the success of the regime and to demonstrate the superiority of the Aryan race. The victories of the African-American athlete Jesse Owens for the USA infuriated the Nazi leadership.

Loudspeakers in public places also blared out Nazi propaganda. Much of the information Germans received reinforced the message of Aryan racial superiority whilst demonising the Jews and other 'enemies' of the regime.

The Malicious Gossip Law passed in 1934 made telling an Anti-Nazi joke a crime, leading to a fine or imprisonment.