The opening of this stanza involves a subversion of the usual order by asserting She grieves for my grief. Again this reinforces the bond the two shared while she was alive. It implies she couldn’t bear to see him sad and suffering.

In his melancholic imagination she is permanently caught in the act of dying, and he pictures her telling him how that bird dives from the sun and that fish leaps into it.

Both of these images represent a reversal of the normal order of things. The bird should fly towards the sun, and the fish should dive into the depths of the sea away from it. Death, by implication, is seen as a reversal of the natural state of living. 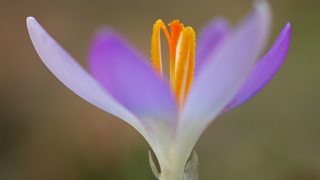 "No crocus is carved more gently"

These images are, in their way, things of beauty in their constructs of language. MacCaig acknowledges this in the comparison of the way his mind is shaped by them to the way a crocus is carved or shaped by nature.

A stark contrast is made, though, at the end of the stanza. Reinforcing this contrast is the use of both a dash to indicate a change of direction and contrastive conjunction but to do likewise.

What follows is a metaphorical image of him hearing other words, black words which whisper to him of the horror of the oblivion of the grave.

This is conveyed in a number of ways - again by a paradox, specifically the oxymoronic sound of soundlessness, which echoes the earlier paradox in stanza one.

There is also a chilling image of her continuously going into a nowhere these black words name. Death is presented as a kind of metaphorical journey that has no destination and never ends.