The Mormon Church was founded by Joseph Smith. He claimed to have been visited by the Angel Moroni in 1827 who told him where he could find golden plates that Smith would translate and publish as the Book of Mormon.

Smith won many followers, but also angered others who accused him of fraud and blasphemy. By 1831 the Mormon Church had more than 1,000 followers, and Smith decided to move them to set up a City of God.

Why did the Mormons move to Salt Lake? 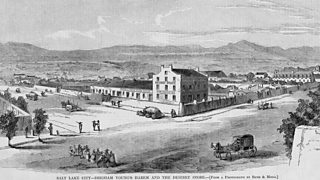 An important reason for moving was that the Mormons wanted to escape the non-Mormons they despised, and called the Gentiles.

They thought Gentiles were ...the lowest of men and disliked their midnight parties, their sabbath-breaking, horse racing and gambling.

The Mormons also had other reasons for moving:

The travels of the Mormons

This chart shows the main stages in the travels of the Mormons, as they moved from place to place before settling in the Great Salt Lake.

Problems and solutions on the journey West

On their trek to the Great Salt Lake the Mormons faced many problems, all of which they had to overcome:

Problems and solutions at Salt Lake

On arrival at Great Salt Lake things didn't get easier straight away. The Mormons faced further problems, which they also had to overcome. Life at Salt Lake was hard, and the Mormons were tired out and worried. Salt Lake was a desolate and forsaken spot with little rain.

The climate is severe and changeable ... the cattle die. Crickets and grasshoppers swarm in myriads... Frost is very destructive...Unknown Mormon traveller 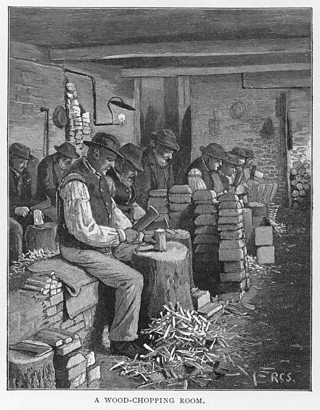 Drawing of men chopping wood in the workhouse

The Mormons had to develop irrigation schemes, using snow water from the mountains - by 1859 Salt Lake was well-filled with peach, apple and other fruit.

There were no trees in Salt Lake, so the Mormons had to make houses from mud bricks - by 1855 there were 'warm, comfortable, neat' houses and a 'magnificent' city, with a temple, a tabernacle and hall.

There were not enough people for the community to be entirely self-sufficient - so the Mormon leader Brigham Young called Mormons from all over the world to go to Salt Lake to help out. As a result, large numbers of Mormons migrated to Salt Lake City (although many died on the way).

The Mormons had no manufacturers, and although they tried to set up industries, they failed - so necessary items often had to be made by hand.

In 1848 the US occupied New Mexico, where Salt Lake was situated, and the US government refused Young's attempt to have a 'free and independent' Mormon state of 'Deseret'. In 1857, 120 members of a wagon train were murdered in an attack by Mormon militiamen. In response the US government sent in 1,500 troops. Eventually a compromise was reached, and the state of Utah (much smaller than 'Deseret' would have been) was created.