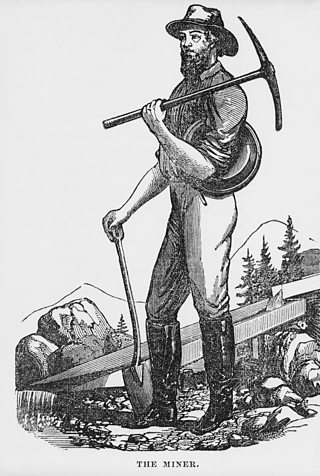 In 1848 gold was discovered in California, and soon thousands of prospectors rushed there, hoping to make their fortune. By spring 1849 there were 40,000 miners (the '49ers') in California.

At first almost all the miners were men, and they lived in makeshift tent-settlements, hoping to make a quick fortune. They were soon followed by shopkeepers and traders.

A small proportion of miners were woman. Other women arrived and took on domestic work, such as cooking and cleaning, sex work, or started their own businesses, such as boarding houses or laundries. In time the wives and girlfriends of miners followed their partners west.

Few miners made their fortune from gold. But they spent the savings they had used to go mining with, and this kick-started the California economy. When the men finally gave up their hopes for gold, they moved onto the land and settled there as farmers.

In 1850 California set itself up as a state of the USA, with a governor.