It is important to define common terms for objects in space.

Planet - a mass of rock or gas that orbits a star. Planets are either small and rocky like Earth and Mars, or gas giants like Jupiter and Saturn.

Moon - a natural satellite that orbits a planet.

Star - a large ball of matter (normally hydrogen and helium) that is undergoing nuclear fusion and emitting light and other forms of electromagnetic radiation. The Sun is a star.

The Solar System is the planetary system for the Sun. It consists of our Sun and the eight planets that orbit it. Other planetary systems have a central star, or sometimes multiple stars, and one or more planets orbiting.

Exo-planet - a planet found in a planetary system that is not ours or around a star that is not the sun. Over the last 20 years there have been hundreds of exo-planets found throughout the galaxy.

Galaxy - a large cluster of stars and planetary systems. Many galaxies are spiral shaped, like our own Milky Way or Andromeda.

Universe - all of the matter in existence. The universe, or what astronomers call the visible universe, consists of millions of galaxies that stretch out through space and time back to the Big Bang. 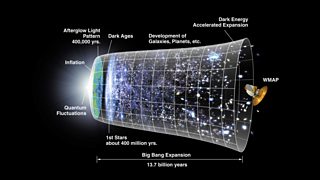 Conceptual illustration of the Big Bang

The image above illustrates how some astronomers think the Universe has developed since the Big Bang, 13.7 billion years ago.

The initial 'event', which created a huge burst of electromagnetic waves can still be detected as the 'Cosmic Background' microwave radiation, and is used to measure the age of the universe.

As all of the material expanded rapidly in a very short time, it is thought to have taken hundreds of millions of years for the first stars to form and start producing light, with groups of stars forming galaxies. As early stars burned themselves out over billions of years, they would either collapse in on themselves or explode in a 'Supernova', creating huge clouds of dust and gas in which new stars and planets were formed.

Throughout this time the galaxies moved away from each other as the Universe expanded, with the expansion getting faster over time. Astronomers do not know exactly how this expansion happens, or how it can be speeding up, but it is thought it might be caused by 'Dark Energy'.