Mary then moves on to High School. She immediately recognises the pointness, dull nature of copying-down class rules:

this is the last period a the day and the sixth time ah’ve hud tae dae it. 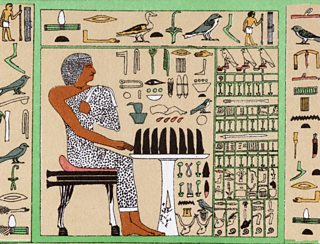 Though some of Mary’s previous teachers let her down through lack of support, she meets Mr Kelly, who she immediately describes as a sarky bastard. Mr Kelly is rude, patronising and cruel to Mary. He openly mocks her work in class, asking if her writing is:

After an exchange between the two in front of the class, during which Mr Kelly describes Mary’s work as utterly unintelligible, she is left feeling mortified, pure mortified.

This exchange signals a period of social isolation for Mary. Though there was no particular conflict, Mary states that:

the class stopped talkin to me.

After moving to High School, social groups around Mary are changing and evolving, but she is left alone. She bluntly states that this experience wisnae nice.

This is a turning point for Mary as she begins to devote her time to creating real hieroglyphics. Mary’s History class spend time learning about the Egyptians. Mary discovers that she’s dead good at hieroglyphics. Mary excels in this small area of the curriculum, and when the rest of the class move on to another project, she remains working on hieroglyphics, academically isolated and:

stuck in a corner a the room.

Despite working alone, Mary seems to be finding ways of expressing herself through her hieroglyphics.

However, when a school inspection is announced, Mary is no longer allowed to work away on her own project. She resumes the same work as the rest of the class.

Mary is still taught by Mr Kelly every day, and she feels that:

his teachin wisnae even as modern as the ancient Egyptians.

Mr Kelly continues to patronise Mary, and she continues to be unable to make progress due to the complete absence of support.