Like Away in a Manger and All That Glisters, Hieroglyphics is told in first person narrative from the perspective of the main character, Mary Ryan.

Like many of Anne Donovan’s short stories, this is an interior monologue. Mary’s thoughts are captured in her own accent:

Mary does not use standard English grammar, and this mirrors not only her speech but the challenges she has in learning English.

The story is set in the Drumchapel area of Glasgow. It is described as being dreary and dull. A lack of colour reflects this - Mary and her classmates sit in class:

lookin out the high windaes at grey bloacks a flats and the grey streets, and sometimes the sky wisnae grey but maistly it wis. 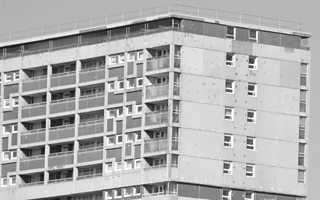 Mary is a schoolgirl who is having great difficulty learning to read and write. It is implied that she may have dyslexia but this is never confirmed. It is impossible for Mary to recognise the patterns required for spelling and punctuation, with her describing how letters:

were birlin and dancing roond like big black spiders.

Mary also does not see the value of learning some aspects of English, particularly in her own situation. For example, she concludes that collective nouns were a bitty a waste when you think on it.

She's a poor wee soul but she tries very hard.

The story is interspersed with comments from other characters. These are usually in standard English and are written in italics. The language and its appearance both contrast with Mary’s dialogue.

they were dead nice to me at school

For the most part, other characters are pleasant to Mary. However, most characters fail to give Mary the academic support that she needs. Although extra lessons are put in place for Mary, when she makes little progress is made, the teacher seems to give up on her and these lessons stop.

Mary’s Primary seven teacher doesn’t seem to have any academic expectations of Mary and instructs her to run errands around the school. Mary feels that:

naebdy ever asked me whit was gaun oan in ma heid. So a never tellt them.