After the War of Independence, Americans were highly suspicious of any one person, king or president, having a monopoly of power.

Power therefore had to be devolved to other people and also checked by additional elected bodies. This is a system of checks and balances.

This is implemented through federalism and the separation of powers. 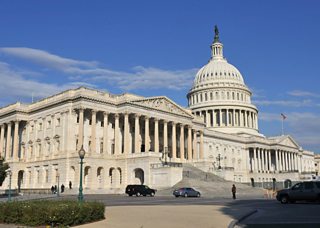 The US Capitol Building; the seat of US Federal Government.

Federalism is the division of government between the national, state and local levels. The United States of America means exactly that.

It is a Federal Republic with a union of 50 states, each of which have their own political systems and courts to make laws and decisions in that independent of the Federal Government.

The Federal US Government is based in Washington DC and is comprised of three parts:

There are 435 members of the House of Representatives. The number each state elects is dependent on its population.

There are 100 senators, two per state and nine members of the Supreme Court. Supreme Court judges are selected for life by the president and with the approval of the senate.

Each of the 50 individual states of the USA also has its own governor, state congress and state court.

Federal, state and local agencies can all have overlapping and even conflicting agendas in areas such as education. A positive side of federalism is that it maximises opportunities for citizen involvement. 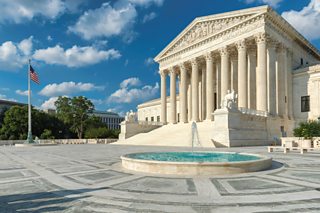 The US Supreme Court

The US Constitution separates power between the Legislature (Congress), Executive (President), and Judiciary (Supreme Court).

The Legislature - is the organisation who makes the laws in society and checks up on the Executive. This is the role performed by Congress.

The Executive - is the person or body responsible for running the government from day to day. The role of the executive is to enforce laws. In the USA this is the President.

The Judiciary - is the organisation who make sure laws passed by the legislature are compatible with the constitution. The Supreme Court performs this role.

The framers (writers) of the American Constitution in 1789 went to great lengths to ensure that political power would not be concentrated within a single branch of national government.

The power to make laws belongs to Congress but laws passed by congress can be vetoed (blocked) by the President.

If Congress can assemble a two-thirds majority in both the House of Representatives and the Senate it can override a presidential veto.

Only Congress has the power to declare war but the President is Commander-in-Chief of the US Military.

The President has the power to:

All of these appointments and nominations are subject to approval by the Senate.