This miracle shows that not all religious leaders were against Jesus.

Jairus, the official from the local synagogue, had heard about Jesus’ reputation as a miracle worker and begged him to cure his sick daughter.

Jesus was on his way to Jairus’ house when he was interrupted by a woman who touched his cloak to cure her bleeding.

While Jesus and his disciples were once more on the way, they received a message that the twelve year old girl had died. Jesus’ words are very important, "Don't be afraid; just believe." Jesus is stressing that anything is possible when we have faith.

When he got to Jarius’ house people had gathered in mourning and were preparing for the child’s funeral. The crowd laughed when Jesus claimed that the child was only sleeping and was not dead.

Jesus takes his closest disciples - Peter, James and John (the inner circle) - and the child’s parents into the room.

Jesus heals by touch when he takes the little girl by the hand. He says “Talitha cumi”, which means “Little girl, get up.” 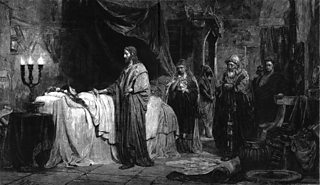 Illustration of Jesus healing the daughter of Jairus

He instructs her parents to give her something to eat. Today some people suggest that the little girl was not dead but was in fact in a diabetic coma and this is why Jesus gives this instruction.

Again Jesus gives strict orders not to tell anyone about this because of the messianic secret .