From the 1890s onwards a new wave of immigrants began to arrive in the USA from Eastern Europe and the Mediterranean.

From 1892 immigrants were taken to Ellis Island in New York to be 'processed'. They received a medical inspection and if they failed they were sent back to where they came from.

For these immigrants Ellis Island was an 'Island of Tears'. Those who passed were given a landing card and started the search for the American Dream.

These new immigrants came from countries such as Italy, Poland, Russia and Lithuania.

They left their own countries to escape poverty, and religious and political persecution.

This group were generally poorer and less well educated than the more established Old Immigrants.

As a result, many found it difficult to obtain well-paying jobs and instead had to accept lower wages. They were also often used to break strikes. 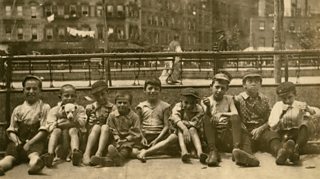 Slum-housing was another problem faced by this group. Cities such as New York, Boston and Chicago had high numbers of these immigrants living in such conditions in the early 20th century.

Many new immigrants tended to live in communities consisting of people from their native country.

Neighbourhoods with names such as ‘Little Italy’ and ‘Irish Town’ started to appear in American cities.

The result of this was that many in this group found integration difficult. They faced several obstacles in their pursuit of the American Dream. These obstacles included: