Crichton Smith is deliberately sparse with details of the location and characters. This anonymity helps to emphasise the universal impact of war.

We can deduce the time from the reference to the Bismarck, a German warship sunk by the Allies during World War Two. A sense of place is created by the use of distinctly Scottish names like Roddy and MacLeod. The mention of the mailboat reveals that this is an island community. 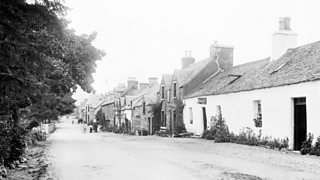 The village itself is described as bare, superstitious and with little colour. This bleak, uninviting environment is reflected in the inhabitants of this island community.

That such communities are intolerant of others is another recurring criticism found in Crichton Smith’s work. It reminds us how susceptible we are to concentrating on what is different about each other rather than what we have in common.

Sarah is described in disparaging terms as a fat domestic bird. This reflects her own lack of drive and aspirations as she perpetuates a way of life that is clearly unfulfilling.

Her discontentment is evident in her resentment of the thin woman whom she considers an outsider and a snob.

Nevertheless, Sarah represents the promise of and possibility of change and progression, even in this claustrophobic and small minded community.

At the moment when she seems certain the thin woman’s son has died, all her resentment and petty grievances disintegrate. She experiences a profound moment of empathy for her neighbour. This strips away all her layers of prejudice and intolerance.

And at that moment the fat woman saw. She saw the years of discipline, she remembered how thin and unfed and pale the thin woman always looked, how sometimes she had to borrow money, even a shilling to buy food…She saw it so clearly and she was astounded. It was as if she had an extra vision.

The character of the thin woman is also depicted as a bird. In contrast to Sarah she is described as aqualine, gaunt and like a buzzard. A buzzard is a hunter, a bird of prey but it is also a scavenger and can survive on the leftover carcasses of animals killed by other predators. By using this comparison and in emphasising how thin the woman is, the theme of sacrifice is introduced.

The thin woman is a widow. She has endured hardship and poverty in order to provide a better life for her son. As a result of this sacrifice, her son is a sub–lieutenant while the fat woman’s son who is just an ordinary seaman.

This results in much of the resentment between the two women since the fat woman’s son must salute the thin woman’s who has a better pay and uniform.

To an outsider, the women should have more in common:

But both of them concentrate on the things that separate and divide them rather than those which could unite. While the reader probably feels more sympathy for the thin woman, she is not without flaws.

She is contemptuous of her neighbour and the other women in the village. They have not made the same sacrifices that she has. She is unable at times to hide her irritation with them, I made sacrifices to have my son educated… I lived on a pension of ten shillings a week. I was in nobody’s debt..

She aspires to a more refined way of life, shown by her attempt to mimic the way the gentry hold their tea cup. This is another mannerism which annoys the fat woman.

The third character in the story is the church elder Macleod. He has either volunteered or been given the responsibility of delivering the War Office telegrams to the villagers.

Crichton Smith uses Macleod to show the hold that the church has on the community and the hierarchies within the village. Although neither of the women seems especially religious they both attend church regularly.

The elder is described as a stiff, pious man who seeks to distance himself from the rest of his community. This is viewed by others as a way of implying that he is in some way better than they are and he is clearly not a popular figure.

This sense of separation and aloofness elicits caustic comments from the women. They note with irony that he has been given the task of delivering the telegrams having never served in the war himself. This creates animosity and the fat woman relishes passing on gossip that his wife has suffered a seizure.

The twist occurs at the end of the story when it emerges that it is in fact the elder’s own son who has been killed.