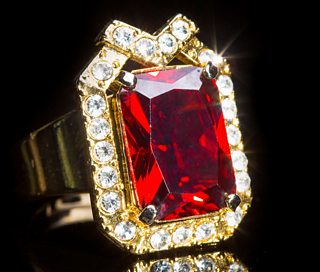 Jackson is keen to advertise his wealth including wearing a "square red ring".

From the start of the story, Jackson is keen to advertise his wealth, with a square red ring shining from his hand as he pulled up in his black polished car.

Throughout the story, Jackson regularly makes references to people they used to know decades previously. Though he wondered vaguely what had happened to some of them, the real reason he wants to find them is to tell someone how well he had done.

All aspects of his life are listed together as if of similar value:

And the wallet bulged from his breast pocket, a wife, two children, and a good job in administration

He is also aware of the status and social position of others:

And finally, Jackson's whole person is summed up in a status symbol:

He took out a cigar to show who he was

His personality seems split between a nostalgic view of his past and a wish to separate himself from his past.

He happily recalls aspects of his childhood and youth:

He remembers courting his wife and lively New Year's Eves. He even seems unashamed of climbing a statue to show off.

His jocular tone seems to ignore the unpleasant or grim aspects of these memories:

At the same time, Jackson sees his background as embarrassing:

Jackson recalls a time when he had been treated unfairly by a factor. His treatment at this point still irks him and he wished that the factor was alive now so that he could show him his bank balance. As he thinks this, he considers the factor to be a "wee nyaff".

It is telling that the Scottish words rose unbidden to his mouth like bile. The simile suggests Jackson's negative feelings towards the language of the place where he had once lived. This suggests that he no longer belongs there.

This is reinforced by his repeatedly stating that he was just paying a visit and just visiting, and the fact that the youths see him as a tourist

Although references to race aren’t frequent, they tell us a lot about Jackson’s character. He sees black people as inferior. When Jackson is threatened by youths later in the story, they reminded him of some Africans he had seen, insolent young toughs, town-bred. There is a suggestion here that, through his prejudice, Jackson links black people to crime.

He has similar views of the poor Glaswegians he comes into contact with. To him they are like animals - a pack of children or prairie dogs

by God, they knew how to deal with punks where he came from.

Jackson supports tough, unfair treatment of people who he deems to be punks – in his mind, black people. His admiration of the brutal, racist regime in South Africa shows the reader that Jackson is, ultimately, a racist character who is both unwilling and unable to consider society from outside of his own perspective. He fails to see the inequalities both in Glasgow and South Africa, fails to see the erosion of society and fails to see the oppression of people. Most of this is down to his obsession with himself and his own situation.