That feverish July, the air tasted of electricity.

By the final stanza, we have reached the summer. School, and this part of childhood is coming to an end.

The weather is significantly hot. The word "feverish" conveys the flustered, agitated mood. The electricity metaphor extends this. It implies there is a new energy and excitement fuelling the children. But it also suggests the threat of lightening and storms, suggesting the difficult time of adolescence.

The laughing bell from stanza one has become a "tangible alarm", a state of stress and excitement that the child perceives in physical terms. "alarm" also suggests a warning of what is ahead. The child is now "always untidy, hot, fractious" and we can infer from this that they are experiencing the beginning of puberty. Duffy uses pathetic fallacy to make this point clear when she describes this taking place under a "heavy sexy sky", which suggests that a storm is building. "heavy" also suggests the burden of their new knowledge and emotions, while "sexy" refers to their sexual awakening.

Mrs Tilscher smiles,/ then turned away.

This time, when the child goes to Mrs Tilscher for help and security it is no longer there. The line break is deliberate here to mimic the new division between teacher and pupil. Instead of a magical world, she is given her report. Mrs Tilscher's role has become matter of fact and ordinary.

The poem ends with the child symbolically running out of the school gates "impatient to be grown". The fear and alarm has translated into an urge to experience life, leaving Mrs Tilscher's classroom behind her.

the sky split open into a thunderstorm. 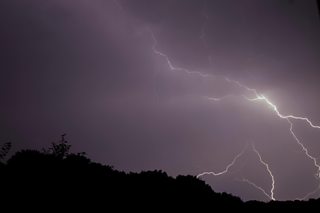 Duffy uses pathetic fallacy once again to close the poem. This illustrates the impact that growing up has on a child – it can be full of drama and strong emotions. There is also an implication that there is danger out there beyond Mrs Tilshcher's safe haven and that the child is racing into a world that, despite its excitement, will do little to protect her.