How did the Crusades begin?

In the Middle Ages, the Muslim world stretched from India to Spain, including Jerusalem and the Holy Land. For Jews, Christians and Muslims, Jerusalem was and still is a holy city. In fact for Medieval Christians it was the centre of their world spiritually and geographically according to their maps.

For Christians, Jerusalem was the place where Jesus Christ died and was buried. The Church of the Holy Sepulchre stood at the site where Christians believed his tomb was found. Christian pilgrims had come to the city for centuries.

To Muslims, Jerusalem is the third most holy city, as Prophet Muhammad ascended to heaven from there. Arab Muslims conquered the Holy Land in 638. The Dome of the Rock and the Al-Aqsa mosque are sites of pilgrimage for Muslims. 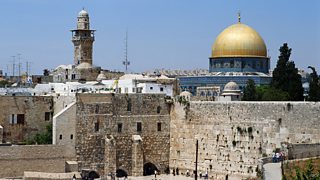 The Church of the Holy Sepulchre had to be rebuilt after it was destroyed by the Caliph of Egypt, Al-Hakim, in 1009. Following this time, Christian pilgrims were free to visit the church. However, around 1077 Muslim Seljuk Turks took control of the Holy Land.

It became harder for Christian pilgrims to visit as various Muslim groups struggled for power. Rumours of mistreatment of local Christians and pilgrims spread. The Byzantine Emperor, Alexius, fearing the spread of Seljuk rule towards his own lands and a threat to the Christian city of Constantinople, appealed to the Pope for help.

Therefore in 1095, Pope Urban II promised the knights of Europe forgiveness of their sins if they went on a Crusade to win back Jerusalem for Christianity. Many responded by taking the cross and showed this act by cutting out red crosses before sewing them into their tunics. 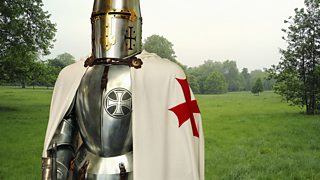 The First Crusade began in 1096. Christians, known as the Franks, from France, Germany and Italy set out on the long journey to the Holy Land, led by nobles and knights. Around 10,000 people gathered at Constantinople, before taking control of Edessa and Antioch.

After a long seige they captured Jerusalem in 1099. The attack was brutal, with thousands killed. A Christian source from the time claimed that The slaughter was so great that our men waded in blood up to their ankles.

The loss of Jerusalem was a terrible blow to the Muslims. Christians took control of the Al-Aqsa mosque and the Dome of the Rock. Jewish people, who had hidden in their synagogues, were also killed by the Crusaders. The Crusaders now established a kingdom around Jerusalem.