Protestantism and the Reformation

A German monk called Martin Luther is credited with the beginning of the Reformation. This was the process which led many to split from the Catholic Church in the 16th century.

In 1517 Luther wrote a document called The Ninety-five Theses and nailed it on to the door of his local church in Wittenberg. 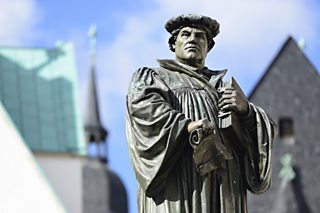 He was particularly concerned at the Catholic Church selling indulgences. An indulgence was a payment to the Church that bought forgiveness for sins.

As a result of his teaching Martin Luther was condemned as a heretic. A heretic is someone who teaches something against the Church, or something false about the Church or God. Many heretics faced terrible deaths, including being burnt alive.

In response to Luther’s teaching the Church called a council (a special meeting of its leaders) called the Diet of Worms.

As a result of the Diet of Worms, an edict (law) was published in May 1521. This stated that Luther was an outlaw whose writings were banned and he must be arrested.

Soon after Luther set up his own church. The general name for those who broke from the Catholic Church was Protestant. Luther’s new church was a Protestant Church that was called the Lutheran Church.

In reaction to the Protestant Church, the Catholic Church initiated a Counter-Reformation. One of the most important events in the counter-reformation was called the Council of Trent.

As with any breakaway group, the Protestants could not all agree on a way forward. They knew they did not want to be part of the Catholic Church anymore, but they did not know exactly what that meant for them.

The Protestants began to split into different groups which focused on different beliefs and practices. This led to the various Protestant denominations – eg Presbyterians, Baptists and Methodists.