My own vowels started to stretch like my bones.

The stanza begins with Kay describing the persona's accent changing as she grows up. The simile effectively conveys both that the girl is getting older and taller, and how she is adopting the longer sounding English words instead of the shorter more guttural phrases which she used to end stanza one.

And I turned my back on Scotland

As a result, she feels she has rejected Scotland and her past, almost in an act of betrayal.

Words disappeared in the dead of night,/ new words marched in

Kay uses a metaphor of an army marching to suggest an invasion, as her old words are secretly removed and replaced. This suggests a frightening change that goes on without the girl noticing, perhaps even while she sleeps. She is powerless to stop it. She describes this invasion of English words using deliberately negative examples.

The words have a negative meaning but they also sound negative, as if giving an exaggerated idea of Englishness. The reader can imagine the words repeated in a posh accent, drawing out the long sounds. They sound weak compared to the short, harsh Scottish words. 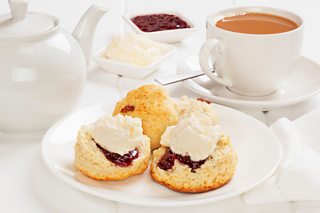 Kay portays an exaggerated Englishness with the image of eating scones

Kay continues her humorous portayal of exaggerated Englishness with the image of eating scones. She now says the word with the longer vowel. "Stones" has connotations of heaviness and coldness. Something that should be enjoyable and which should feel good in the mouth (like words) is made unpleasant. Kay suggests she thinks that her "new tongue" is a burden to her and that she is not able to express her feelings as evocatively as she did before.

Oh where did all my words go/ my old words, my lost words?

The repetition of the possessive "my" creates a melancholic and nostalgic tone. It also emphasises a sense of ownership over the words.

Did you ever feel sad when you lost a word

Up until now Kay has used the first person so that the persona is talking about herself and her own experience. Here she introduces "you" as if having a conversation with the reader. She wants us to think about our own experience, to compare her loss with our own. This suggest that this is a universal experience.

She wants to "call back" her lost words, but to do this she says is "like calling in the sea". This simile suggests it is impossible to do so; it also implies that it is a natural development, as if words had been swept away by the tide.

Kay then uses several images to highlight the extent of this loss. Firstly, she uses personification when she describes her "words wandering" and how she would have "taken them in". This likens her Scottish phrases to lost children or stray animals who need a home.

She then uses a metaphor which compares them to pills that she would have "swallowed… whole" and "knocked… back". The implication here is that they do her good; they heal and sustain her.