When I was eight, I was forced south.

The poem opens with Kay describing her then-partner's move to England as a young child. "When I was eight" has an anecdotal quality to it, as if she is sharing a story with the reader. It clearly shows that this is a reflection based on personal experience. She tells us she was "forced south", implying that she had no say in the matter. It is clear that something has happened to her. This idea of a change that she cannot control continues through the poem.

"Not long after" maintains the story-telling tone. She says "when I opened/ my mouth, a strange thing happened." The phrase "strange-thing" also reminds us of a child's story or a fairy-tale. She builds up suspense so when the revelation finally occurs: "I lost my Scottish accent", it has more impact.

Words fell off my tongue

Kay again implies the persona had no control of what happened. The use of the passive suggests this was inevitable. The words metaphorically falling off her tongue creates a surreal and almost grotesque image, recalling the childhood world of fantasy. Kay suggests the words are tangible, physical things, even alive and she continues to portray them as living things for the rest of the poem.

The final lines of the stanza list the Scottish words and phrases that she has lost. The words are in italics to emphasise the fact that they are spoken words. The words are harsh and gutteral with short sounds that create a staccato effect. The best way to appreciate these is to listen to Kay's own recording of the poem found here:

She begins with individual words and then includes longer expressions, ending with the forceful "Shut yer geggie or I’ll gie you the malkie!" She plays with the sounds here, beginning with the rhyming "wabbit" and "crabbit" then "stummer, teuchter", followed by the repetition of "so" and "see" and the half rhyme created by the words "geggie" and "malkie". All of this makes the language sound evocative and suggests that she is enjoying remembering the words of from her childhood. 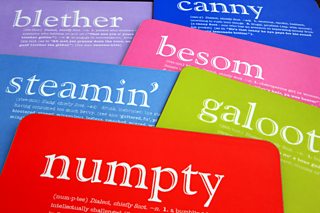