What does Islam say about the origin of evil?

The Qur’an teaches that evil originates from the refusal of Shaytan (Satan/the Devil) to bow down to Adam when ordered to by Allah. Shaytan is also called Iblis.

For his disobedience, Iblis was cast out of Heaven by Allah. He vowed that in revenge he would spend eternity trying to tempt humans to do evil. Allah said:

‘O Iblis! What is your reason for not being among those who prostrated themselves?’ Iblis said: ‘I am not one to prostrate myself to man, whom Thou didst create from sounding clay, from mud moulded into shape.’ Allah said, ‘Then get thee out from here; for thou are rejected, accursed. And the curse shall be on thee till the Day of Judgement.'Qur’an 15:28

What does Islam teach about evil and suffering?

Islam teaches that a knowledge of right and wrong is an essential part of human nature.

Muslim teachings say that individuals should know, without having to be informed, which actions are evil and will contribute to the suffering of others, and which actions are good. This inner sense of right and wrong is called fitrah. Muslims believe all human beings are born with this sense or instinct to live according to the laws of Allah.

In The Last Sermon(or Farewell Speech), the Prophet Muhammad warned Muslims about Shaytan:

Beware of Shaytan, he is desperate to divert you from the worship of Allah, so beware of him in matters of religion.The Last Sermon or Farewell Speech of the Prophet

Most Muslims believe they have free will in the sense that they are responsible for everything they do in a particular situation.

They must choose between right, using the guidance of Allah, and wrong, following the temptations of Shaytan. However, most Muslims do not believe they have absolute free will, as Allah can intervene in their lives at any moment.

Muslims can overcome suffering in their own lives and help to ease the suffering of others by following Allah’s path. This path is set out in the Qur’an and in the Sunnah. 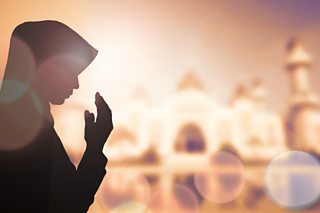 Muslims will pray to Allah for guidance in coping with suffering

How do Muslims respond to evil and suffering?

Many Muslims believe they are only on Earth for a short time. This life is a test from Allah where they must endure evil and suffering as preparation for Paradise.

In the Qur’an Allah says that he will forgive anyone who sincerely repents, just as he forgave Adam and Eve when they were tempted by Shaytan and ate the forbidden fruit:

... if, as is sure, there comes to you guidance from Me, whosoever follows My guidance, on them shall be no fear, nor shall they grieve.Qur'an 2:38

Muslims are also expected to follow Allah’s example of justice, mercy and forgiveness in their treatment of other people:

Hold to forgiveness; command what is right; but turn away from the ignorant.Qur'an 7:199

Since they believe that Allah is in overall control, Muslims often try to see a purpose in suffering. They sometimes understand this purpose to be:

If they respond with patience and remain firm in their faith, they will have increased reward in the afterlife.

For some Muslims, the test of suffering is perceived as a blessing.