What does Hinduism say about the origin of evil?

Most Hindus believe that God does not impose evil on people. Evil is a natural part of life – it happens because of the law of karma.

Karma means ‘action’ and is understood as the law of cause and effect.

Each time a person does something, it has an effect. Good actions have good effects. Bad actions have bad effects. Hindus believe that thoughts also have effects. These accumulated effects make up a person’s merit.

What does Hinduism teach about evil and suffering?

‘Evil’ is the state when good is not present or is ignored. It also refers to the necessary ‘bad’ things required for cosmic balance.

Hindus believe in karma or ‘intentional action’. Most Hindus believe that much of the suffering they endure is a result of their own actions. Previous motives and actions need to be made up for.

Many would add that this is not about ‘deserving’ suffering, but about taking the opportunity to learn from it. It is about not repeating mistakes.

The response of those around the sufferer should always be compassion and kindness, otherwise they will suffer ‘bad’ karmic consequences.

Sometimes things happen that do not seem to be the result of any action, eg natural disasters. Some Hindus explain these events as a ‘play of the gods’, which is part of a cosmic realm and beyond human understanding.

Others believe natural disasters are necessary for the balance of life on Earth. For example, the fertile soil that results from volcano eruptions and rivers in flood may help to grow crops for food.

There is also the potential for a person's atman (soul) to gain merit in helping the victims of natural disasters.

Some Hindus may also see certain natural disasters as the consequence of humanity’s poor treatment of the planet.

How do Hindus respond to evil and suffering?

The Bhagavad Gita (sacred Hindu text) encourages readers to detach from the world and appreciate that everything is just part of an eternal cycle. The role of humans is to do as little harm and as much good as possible so that they may escape this cycle.

Liberation from rebirth is called ‘moksha’. Humans only suffer because they cannot accept how limited their existence is in the scheme of things.

Most Hindus believe that moral evil is caused by other people. They feel that Hindus should act with kindness and non-violence to all living things. This belief is called ‘ahimsa’.

Those who deliberately hurt others or harm the Earth will face karmic consequences. But it is the duty of everyone else to challenge such people and help them to see the light.

Mahatma Gandhi was an Indian activist who led his country's campaign for independence from British rule. Gandhi taught Hindus that it is their duty to help people who are suffering. He said: 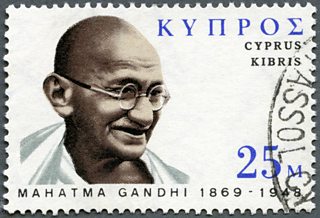