The remainder of the poem continues to highlight the damage Midas’ gift has done to their relationship with the beginning of stanza seven summarising the full effect in the single statement: Separate beds.

Mrs Midas’ terror of her husband touching her is continued and emphasised as she reveals how she even puts a chair against the door at night because she is near petrified, scared of being turned into gold, a harsh consequence and the reality, should he come near her.

Humour again, offers a bit of light relief as she relays how the spare room has been transformed into the impressive tomb of Tutankhamun. This symbolises that their relationship and dreams are effectively dead.

The separateness of the couple is further highlighted as she focuses on the physical suffering they must now endure, in contrast to the fulfilling relationship they enjoyed before Midas was granted his wish. These were halcyon days days of joy when they were passionate and unwrapping each other, rapidly, like presents, fast food. However, she now rightly fears Midas’ honeyed embrace since it would be deadly to her.

In stanza eight, Mrs Midas expresses her sadness now of being deprived of the opportunity to have a real baby. 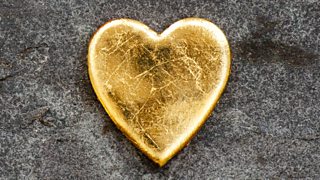 She begs the question: Who…can live with a heart of gold? Usually, this expression has positive connotations and is associated with kindness and empathy. Here, this familiar metaphor is ironically inverted as the literal meaning is implied, inferring that it would be impossible to survive as a living being with such a heart.

A superficial, initially attractive description of the baby she dreamt about is presented with its perfect ore limbs and amber eyes, but this descends into a disturbing image as these flame-coloured eyes are deemed to be holding their pupils like flies. Sadly, her milk will remain only a dream too as her breasts can never bear any milk as long as her husband has this gift.

Waking to the streaming sun, again, poignantly reminds us that each day she will awake to a world in which gold dominates every waking moment.

In Stanza nine, the consequences of the myth and the effect on their lives continues to destroy their relationship as Mrs Midas bluntly informs us: So he had to move out.

She then conveys how she had to drive him to live in their isolated caravan under the cover of dark and how she returns alone as: the woman who married the fool, clearly blaming her husband for stupidly wishing for gold. She tells of how at first she visited at odd times, always parking the car a safe distance away in case she was affected by his gift.