The Roman governor, Pilate, was the only person who could legally sentence Jesus to death. So the Jewish leaders sent Jesus to him for a second trail, hoping he would be found guilty and put to death.

Blasphemy was not a crime under Roman law, so the Jewish leaders said that Jesus was guilty of leading a rebellion against the Roman Empire by claiming to the Messiah. In creating a new political charge, they knew that Pilate would take notice of the case.

Pilate asked, “Are you the King of the Jews?”

Jesus replied “So you say”, but he did not say anything about the accusations the chief priests made against him. This was surprising for Pilate, and he couldn’t see a reason to charge Jesus. Pilate could see that the religious leaders felt threatened by Jesus and were looking for a way to get rid of him. 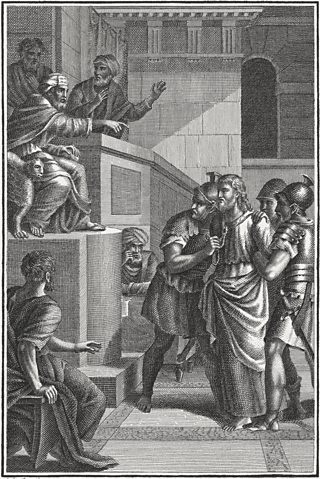 Copper engraving of Jesus being brought before Pilate (published circa 1850)

Pilate’s wife had a dream and she said to him, “Have nothing to do with that innocent man.” Dreams were taken very seriously by Romans so Pilate did not want to condemn Jesus to death.

Because of this, Pilate tried to find a solution. He offered the crowd to either release Jesus or Barabbas, a convicted murderer. It was a Passover tradition to release one prisoner, and it seemed obvious to Pilate that the crowd would ask for Jesus to be released.

However, Pilate’s plan did not work because the Sanhedrin persuaded the crowd to ask for Barabbas to be released, instead of Jesus.

Pilate did not want to damage his relationship with the Jewish leaders, so he gave in to the crowd and sent Jesus for crucifixion.

Jesus was taken away and a crowd of soldiers began mocking him.

They stripped him and forced him to wear a scarlet or purple robe.

They twisted together a crown of thorns and set it on his head.

They placed a staff in his right hand and knelt in front on him and mockingly said “Hail, King of the Jews.”

They did these things to mock him – purple was the colour of royalty, and a king would have a crown and a sceptre.

They spat on him and beat him with the staff, before putting his clothes back on and leading him away to be crucified.