Mark’s account of the resurrection is short compared to the other evangelists (the gospel writers Matthew, Mark, Luke and John).

After the Sabbath was over, early on the Sunday morning, the women went to the tomb to anoint Jesus’ body.

On the way they were discussing who would move the heavy stone from the entrance for them, but when they arrived they saw that the stone had already been rolled away.

They were alarmed when they entered the tomb and found a young man dressed in white. He told them that Jesus had risen and to tell the disciples, including Peter, that he would meet them in Galilee. However, the women were so terrified that they ran from the tomb and did not tell anyone. 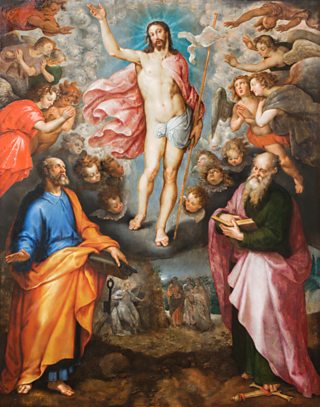 The most important day in the Christian year is Easter Sunday, when Jesus was raised to new life. Because of this, Christians made Sunday their Sabbath (holy day).

Through resurrection, Christians believe life has triumphed over death, good over evil, hope over despair. The resurrection is a sign of God's great power. Nothing is too great for God to achieve, and this is comforting and encouraging for Christians in difficulty.

Jesus' death and resurrection open the possibility of eternal life with God for all people. Death is not something to be feared. It is a gateway into a new and richer life. This is a comfort to Christians facing death or grieving the death of loved ones. They believe separation is not final. Those who have died are with God.

Christians believe that when they are baptised they share in the resurrection of Jesus and so are brought into a new relationship with God. They show this in their actions by being kind and loving.