Jesus was taken to a place called Golgotha – which means ‘The place of the skull’ - for his crucifixion. This is where all crucifixions took place, it was just outside the city wall.

Crucifixion was used on the worst criminals as it was a very torturous form of execution. According to Jewish scripture, those who died by crucifixion were “under God’s curse”.

It was common to make the criminal carry the cross-beam of their cross to Golgotha. Most criminals would have been able to do this without any help. The fact that Jesus needed assistance from Simon of Cyrene tells us how weak he must have been – both physically and emotionally. The soldiers offered him a drink to relieve his pain, but he did not take it.

Romans crucified people publicly as an example to others. Many people would have watched the crucifixions and shouted insults at the criminals. On the top of each cross there would have been a sign outlining the crime committed. On top of Jesus' cross it said ‘Jesus of Nazareth, King of the Jews.’ 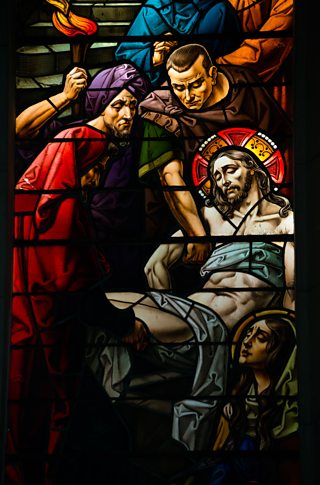 Jesus was crucified at 9.00am between two bandits.

The crowd, including the religious leaders, laughed at Jesus’ weakness and made fun of him. They shouted, “He saved others but he cannot save himself.” In this moment we can see Jesus as the suffering servant, alone and rejected by all. This was prophesied in Isiah:

He was put to death for the sins of our people.Isaiah 53:8

Mark records some unusual events which occurred during the crucifixion of Jesus:

Mark notes the women who were present and witnessed Jesus’ death - Mary Magdalene, Mary (the mother of James and Joses) and Salome. These women did not run away like the disciples and were the first at the tomb.