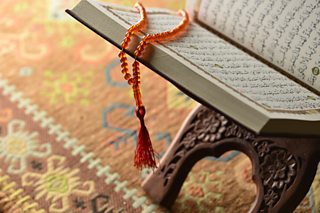 Muslim's believe the Qur'an is a revelation from Allah

Muslims consider the Qur’an to be different to any other book as they believe it to be the direct word of Allah.

The Prophet Muhammad became the messenger of Allah after his first experience of revelation in the year 610CE. For the next 23 years, the Prophet continued to have Allah’s word revealed to him.

The revealed teachings were written down by the Prophet Muhammad’s close friends and followers.

The popular view amongst Muslims is that the final words of Allah to Muhammad were:

This day I have perfected your religion for you, completed My favour upon you, and have chosen for you Islam as your religion.Qur’an 5:4

The Sunnah refers to the sayings and practices of the Prophet Muhammad, and his approval of the actions of his companions. His example is considered to be perfect. They are found mainly in the Hadith.

For non-Arabic speakers it may be difficult to understand or to explain the content of the Qur’an, as some believe that key words and concepts can only be fully understood in the original Arabic. There are also some teachings in the Qur’an which may appear at first sight to contradict Muslim morality, or they may fit uneasily with widely accepted modern values.

For example, this passage appears to suggest that it is allowed for men to enslave women during war:

Prophet, We have made lawful to you the wives to whom you have granted dowries and the slave girls whom God has given you as booty.Qur’an 33:50

Muslim scholars have been engaged in tafsir (the detailed explanations of verses and words of the Qur’an) for centuries. Their aim is to try to explain such difficulties and to help believers understand the true meaning of the Qur’an.